Kainos chief reflects on why business can be so challenging . . . and the bigger picture 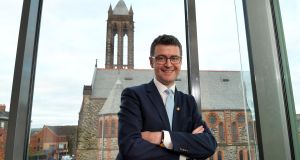 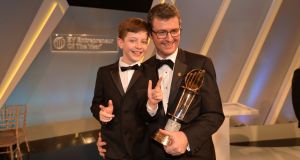 It wouldn’t be unusual for high-flying executives to celebrate their company’s successful stock market flotation by splashing out on a top-of-the-range car. But that’s not Brendan Mooney’s style. Rather than pondering the choice of a Mercedes-Benz S Class or a BMW 5 Series after his company Kainos’s recent listing, he did what he usually does and took the bus.

The Belfast-based IT firm listed its shares on the main market of the London Stock Exchange in July 2015 in a flotation valued at £161.3 million (€189 million). The initial public offering reportedly netted Mooney some £4 million, but neither that nor his recent crowning as EY Entrepreneur of the Year has led him to replace the car he sold five years ago.

The businessman continues to commute to Kainos’s headquarters off Botanic Avenue on foot or by bike, with buses providing transport for longer journeys to the company’s offices in Dublin and Derry.

“My wife still has a car and I had one myself until 2011, but after we did a buyout, I was left with a choice of paying the mortgage or the motor loan so I got rid of the car and haven’t got round to purchasing another one yet. I’ve come to know the bus timetables by heart over the years and enjoy travelling that way,” he says.

Add his liking for public transport to Mooney’s love of alternative music and after-work football with his co-workers, and it becomes obvious he’s not your stereotypical tech tycoon.

The bespectacled businessman, who has been with Kainos since joining the firm as a graduate in 1989, has led it to new heights since taking over as chief executive in 2001 and he says he’s not done yet.

“My appetite has, if anything, increased over the past couple of years rather than wavered,” Mooney says.

Kainos, which began as a Queen’s University spin-out, develops digital technology solutions for businesses and organisations in the public, healthcare and financial services sectors. It is the North’s largest locally-owned IT services company and one of only two listed firms in Northern Ireland.

Speaking to The Irish Times at the company’s offices a few weeks after winning the Entrepreneur of the Year award, Mooney says he is happy with the level of success enjoyed by Kainos. The firm, which is due to update investors on progress next week, added more than 30 customers in its first half of 2016 alone and he says it can achieve much more.

“Where is it written that a global IT company has to be headquartered on the west coast of America? Or in France, Germany or Japan? Why not here in Belfast? That’s the aspiration we have, to genuinely build a global firm right here,” he says.

Such statements might come across as bullish in print but Mooney delivers the words gently. The softly-spoken Northerner admits he generally prefers to stay out of the limelight.

Mooney, who also scooped top honours in the International Entrepreneur of the Year category at the EY awards ceremony this year, admits he did need some encouragement to take part in proceedings.

“I can genuinely say that when my name was first called out on the night, I was so surprised that I didn’t know what to do next. I had assumed someone else would win so was two-thirds of the way to the stage before I realised I had left my glasses on the table. I couldn’t see the steps going up to the stage so found myself hesitating as to whether I should turn back to pick them up or not. In the end I decided to just hope for the best and keep going,” he says.

Kainos was established in 1986 as a joint venture between ICL (later Fujitsu) and Qubis. It has a market capitalisation of about £235 million and employs close to 1,000 people across five countries. Clients include Diageo, FBD, Travelex, Netflix and the National Health Service (NHS).

Kainos has successfully spun out two companies – Meridio and SpeechStorm – and, over the past four years alone, has delivered 33 per cent annual compound growth.

In May, the company announced its first full-year figures since it listed. These show that its IPO has done little to stop momentum with revenue rising 26 per cent to £76.6 million in the year to the end of March.

Mooney was one of the firm’s earliest recruits, having joined it after graduating with a degree in computer science at University of Ulster. He worked in a number of roles before relocating to Dublin for a few years in the early 2000s to help set up the company’s office in the south. He is from just outside Dunloy, a village near Ballymena, and took up computers early. Other than a year spent working for Allied Irish Banks in Dublin, he has spent his career with Kainos.

The company has enjoyed particular success in recent years, carving out a niche for itself developing digital services for central government in the UK. Among the projects it has worked on are the roll-out of a new system for the cabinet office to enable individuals to register to vote online, a major national project for the Driver and Vehicle Standards Agency aimed at modernising the MOT system, and the development of an electronic medical records platform, which is widely used by the NHS.

“Our software is live in 104 hospitals with 28 million patients and it manages three billion images. It saves hospitals money in the first 12 months,” says Mooney.

The public sector now accounts for just under half of the company’s business, a situation that many firms might find somewhat concerning, particularly given Brexit. However, Mooney says the company is not too worried about the future.

“There are quite a lot of opportunities for us from Brexit in the short term but we are obviously remaining somewhat cautious about the longer term,” he says.

“When you look at digital government, what we do is save government tens of millions of pounds and that kind of saving isn’t going to go out of fashion. If you look at the UK, they are looking to digitise 300 different interactions between citizens and the state covering everything from booking your driving test to filing your tax return. There have been 40 interactions introduced so far and we’ve been involved in over half of those,” Mooney adds.

The move to embrace the public sector was borne out of necessity as much as desire, one of many shifts the company has had to make to keep afloat over the years.

Mooney’s start as chief executive in 2001 coincided with so many unexpected and potentially damaging incidents that he is occasionally jokingly referred to as ‘Lucky’ by some of his colleagues.

“When I first took over the company in 2001, 93 per cent of our business came from our then-parent, Fujitsu. We were doing massive projects for them such as working on a ticketing system for the London Underground. However, within a year of me becoming managing director, they shifted strategy in a move that meant our business levels dropped dramatically,” says Mooney.

“Added to this was the dotcom bubble bursting and the Twin Towers attacks, which took place just three months after I took over. It was a challenging time for us and the board showed great patience in me because I was very much a rookie CEO at the time, being only 31 or 32 years of age.

“It was difficult to see how we’d turn things around but they stuck with me while I sought to find a new direction for the company. It was after this that we focused on building up business in Ireland.”

Not only did Mooney have plenty to juggle professionally at that time, he was also dealing with a personal crisis. His father Bernard, who had brought up Mooney and his five siblings as a single parent after the early death of their mother, was diagnosed with terminal cancer.

“Something like that happening helps to give you a balance, a perspective. Difficulties in business can be challenging and hurtful, but there’s always a bigger picture. My dad lived for 14 months post-diagnosis and there were times when I had to decide between getting on a plane for business and wanting to attend his chemotherapy treatment sessions, but I think I balanced it out well and got to spend some good time with him,” he says.

Having built up the business after he took over, Kainos again found itself facing troubles come the global downturn and 2009 and 2010 were difficult times.

“At that stage, two-thirds of our business came from Irish banks and insurance companies so we had to be quite agile to respond to that. We invested for the future around that time, which was contrary to what most companies were doing. We felt the need for a greater presence outside of Ireland and wanted to invest in healthcare and build a relationship with Workday [an implementation partner for the company] so that’s what we focused on,” he says.

Mooney credits his staff for rising to the challenge posed by the downturn. “When things were really tough, we asked the team to pull together and they absolutely did to a person. They worked hard, putting in extra hours and didn’t look for pay rises, and that cohesive spirit was critical for us getting through, what was a very tough time,” he says.

Mooney takes a keen interest in his staff and he’s not just paying lip service. Not many chief executives take the time to respond personally to reviews of their firm on the company review website Glassdoor, but he does.

“Our staff want to change the world and that’s a great well of optimism to draw from,” he says.

With a young, energetic workforce and a healthy pipeline, Mooney expects Kainos to continue to grow in the coming years, regardless of what happens in terms of Brexit.

“Our customer retention figures are fantastic and satisfaction ratings are so strong that 97 per cent of our clients think we’re doing an excellent job. We’re the lead supplier in the three markets we operate in and, if all we ever did was to service those segments. we would soon be a company three or four times the size of what we are today,” he says.

Something you might expect: Brendan discovered computers early on in life

Something you might not expect: An Ipswich Town fan, Brendan also has a love of punk and rap music