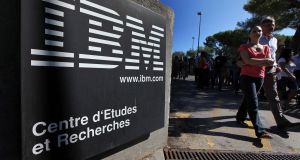 IBM reported third-quarter revenue that beat analysts’ forecasts, driven by gains in its cloud offerings, an area the company will focus on exclusively after spinning off legacy business units.

Earlier this month IBM announced plans to shed its division that manages corporate computer systems and go all-in on cloud services and artificial intelligence to help revive fortunes at the 109-year-old company.

After two years of declining or flat revenue, IBM is hiving off the unit that handles day-to-day infrastructure service operations and accounts for about a quarter of the company’s total sales.

But that business has shrunk in recent years as customers have moved more of their operations to the cloud, where IBM competes with rivals such as Microsoft and Amazon. com.

Meanwhile, demand for cloud computing services has boomed as companies have shifted to remote work. Chief executive officer Arvind Krishna took over from Ginni Rometty in April, and has moved quickly to cut thousands of jobs as many of IBM’s customers have pared investments and held off on big software deals during the pandemic.

The splitting off of the services unit, which won’t be completed until next year, will let the company target hybrid-cloud software and services.

Sales fell 2.6 per cent to $17.6 billion for the three months ending September 30th, the Armonk, New York-based company said on Monday in a statement. That was slightly better than the $17.5 billion analysts had forecast, on average.

The revenue decline was driven by tech support units Global Business Services and Global Technology Services, where the business that will be spun off is housed, which reported decreases of 4.7 per cent and 3.6 per cent, respectively.

Meanwhile, total cloud revenue increased 19 per cent to $6 billion, led by Red Hat, which saw a 17 per cent bump in sales.

IBM released preliminary results earlier this month when it announced the spinoff.

“This is one of the last quarters where IBM’s lagging hardware business will drag down performance, as those operations will be spun out to NewCo in 2021, with IBM instead focusing its attention and investment behind cloud and AI, it’s strongest performing areas,” said Nucleus Research analyst Daniel Elman, in a note .

Earnings excluding some costs were $2.58 a share, beating the average analyst estimate of $2.55. Shares closed little changed at $125.52 on Monday in New York.

IBM stock has declined 6.4 per cent this year, compared with a 6 per cent gain in the SandP 500 Index. – Bloomberg