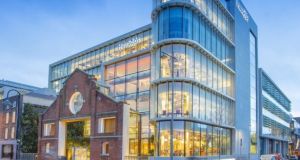 HubSpot’s offices in Dublin. The latest accounts for the company show those employed increased by 157 people to 641 last year.

Marketing software company HubSpot, which has been growing its presence in the Republic, has reported a sharp rise in revenues at its Irish operation.

Newly filed accounts show HubSpot Ireland recorded revenues of €160.7 million last year, compared to €112 million in 2018 on the back of a rise in customers. The Irish subsidiary also reported a decline in pretax losses from €7.7 million to €4.4 million.

HubSpot, founded by Brian Halligan and Dharmesh Shan in June 2006 at Massachusetts Institute of Technology, has more than 95,000 customers in over 120 countries. It employs 9,300 people worldwide, including more than 600 in Dublin.

The company, which first established operations in the Republic in 2013 with a commitment to hire 150 people, earlier this year announced plans to create an additional 450 jobs in a move that will take total employees to nearly 1,000 by 2023.

The latest accounts for the company show those employed increased by 157 people to 641 last year.

A breakdown of turnover by class of business shows €130.2 million derived from subscriptions with a further €25 million coming from intercompany revenue. A significant chunk of sales – €122 million – were from mainland Europe with north America adding a further €27.4 million. Irish revenues totalled €5.4 million, up from €4.2 million a year earlier.

As with many multinational tech companies that establish operations in the Republic, HubSpot originally intended to use its Irish business primarily as a base to support sales, marketing and customer service functions when it opened. However, it now has a local engineering team in situ that was heavily involved in work to introduce a new product line called Service Hub, just over two years ago.

The introduction of the new solution enabled HubSpot, which previously provided a range of customer relationship management and sales and marketing tools, expand into the customer service sector.