Google’s Pixel 4a: A midrange phone that punches above its weight

It has an excellent camera, headphone jack, good battery – but why no water resistance? 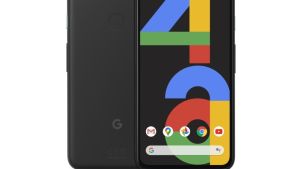 The Pixel 4a does well for a budget-friendly phone

Flagship smartphones have lots going for them. They get the best technology, including top-notch cameras and stunning screens, and a whole lot of other stuff you didn’t realise you needed and, in some cases, may never use.

But they cost. They cost a lot. You either spend a mortgage payment buying the phone outright and sim free, or you lock yourself into a contract with a network for up to two years.

There is, however, a different way. The midrange phone market has improved significantly over the years, offering many of the same essential features you get in the more expensive handsets, and leaving out some of the nice extras that are not such must-haves.

Google’s Pixel range now includes the Pixel 4a, the smaller, less expensive version of the Pixel 4. At €389, it is far more affordable than its larger stablemate, but you must sacrifice a few features.

But let’s focus first on what you do get. There’s a 5.8in OLED display, with a hole punch front-facing camera, so there is no notch to deal with. The 4A display sticks with the 60Hz refresh rate rather than the 90Hz of the Pixel 4, but most people won’t really notice the difference in how smooth the scrolling is, so it isn’t a deal breaker.

Google has broken with tradition here and only released a single size for the Pixel 4a. The truth is you don’t actually miss the larger version. It certainly feels more like a budget phone, though, with a plain body – and a polycarbonate one at that.

That smaller size means it’s easier to hold in your hand and text one-handed, which is becoming a bit of an issue with increasing phone sizes. Most phones are squeezing down the bezels to almost nothing in an attempt to get more screen for the size of the enclosure, but they can still be a little uncomfortable.

The Pixel 4a comes with the same main camera the Pixel 4 had, but minus the telephoto lens. It’s a single camera set-up here. You’ll miss that for portrait shots – although there is a bokeh effect, it isn’t as good as the dual camera set-up – but for the rest, the camera does a great job.

This is really the phone’s main selling point. The photos it churns out are vibrant and detailed, although at times they can look a little unreal. Even in tricky lighting situations, the camera pulls it out of the bag, with Night Sight included for low lighting situations.

Losing that telephoto lens also means you will be dependent on Google’s Super Res Zoom, which has 7x magnification. Overall, it doesn’t do a bad job. Video is equally good, with smooth footage even when on the move.

The 4A also sees Google expand its live captioning feature, which now includes phone and video calls, including WhatsApp and Facebook Messenger. It’s not essential for most people, but if you have hearing issues it may make your life a bit easier.

The 4A also has a 3.5mm headphone jack, which puts it a step ahead of the Pixel 4, if you want to stick with wired headphones.

What the Pixel 4a leaves out is non-essential for the most part. There is no facial scanning, with the 4A leaving out the Soli sensor chip that also recognises gestures. That means you have one option for biometrics: a fingerprint on the back. That isn’t the worst thing in the current situation, where face masks have rendered facial ID completely impotent in many situations outside the home.

There is fast charging but no wireless charging, which is again a bit of a pain but not a deal breaker for most.

The one exception? There is no water resistance, which seems like a poor choice.

Like Google’s other phones, there is no way to boost storage with a memory card, but the Pixel comes with 128GB of storage on board. That’s a lot to burn through, although it’s not impossible to do.

Overall, the Pixel 4a does well for a budget-friendly phone. If Google would reconsider the water resistance, it would be almost perfect for the price.

Easy to handle and with a decent battery packed into it, the Pixel 4a is one of the better budget phones out there. The camera, however, is its standout feature. Losing the dual camera doesn’t hinder it too much, and the video camera is surprisingly stable.

It feels a little cheap, and the lack of water resistance is a bit of a pain.

The extension of live captioning is welcome, even if it’s just when you are using your phone in a noisy environment. The phone ships with Android 10, but being a Google phone puts it in line to get operating system updates first. The Personal Safety app is also built in to the 4A, so you get crash detection and the ability to line up safety checks.

The Pixel 4A punches above its price tag in most areas – if Google would just make it water resistant.