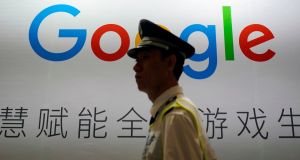 A Google sign at the China Digital Entertainment Expo and Conference in Shanghai. Google is developing a censored Chinese version of its search engine. Photograph: Aly Song/Reuters

Hypocrisy season is in full swing for Big Tech. Not that it ever fully abates – it’s never all that difficult to find some random, telltale mismatch between what companies say and what they do.

However, this week the posturing ended up on swaggering, if unintended, show.

This time around, the company in question was Google and, thanks to a freedom-of-information request, we got to see the hollowness of certain favourite Silicon Valley corporate platitudes. In this case, it was the gulf between what Google expects select others to do in the name of important, ethical principles, and then how it turns its back on those exact same platitudes in the name of greater profits.

On the one hand, as the Sunday Business Post revealed last weekend, Google made a submission to the Irish Department of Justice on the issue of the proposed new digital safety commissioner role, which would potentially carry new powers for assessing and removing content.

In its submission, Google argued for caution, because “any extension to the law on harassment must be carefully limited in order to avoid imposing undue interference with the right to freedom of expression”.

Google also warned that if stricter laws were imposed in one jurisdiction – in this case, Ireland – “the richness of content available online would be severely curtailed and may result in the ‘lowest common denominator’ effect, whereby only content that is permissible under the most restrictive regulations worldwide is displayed on the internet.”

First, there’s the hilarious suggestion here that Ireland – Ireland! – might impose sweeping censorship that would goosestep the world into a globally-imposed “lowest common denominator” of content.

More seriously, this is all preposterous sanctimony, given that The Intercept last week revealed that Google has for some time now been developing a censored Chinese version of its search engine, which will remove sites and terms deemed offensive by the Chinese government.

Code-named Dragonfly, the freedom of expressionless search engine – let’s just all call it the Lowest Common Denominator Engine – will, according to internal documents seen by the Intercept, “blacklist websites and search terms about human rights, democracy, religion and peaceful protest”.

The engine also will detect and filter out all sites blocked by China’s “Great Firewall”, the state’s own internet censorship tools. Google’s own examples of sites that would be expunged from search results included the BBC and Wikipedia. “Undue interference”, anyone?

Lest you think this project came out of nowhere, Google was already willing to censor for access to the vast Chinese market a decade ago. But in 2010, after severe criticism from the public, politicians and human rights activists worldwide, the company pulled out of China.

However, now it seems China is too enticing a revenue prospect for Google to worry too much about human rights, ethics and principles.

These matter only if a tiny country on the edge of Europe wants to install a digital safety commissioner with the intention of giving children and adults a few more protections online.

In light of Google’s written comments to the Department of Justice, does that mean we are all going to see the same curtailed, censored search results Google plans to deliver to China? Because surely, China is exactly that place where people “only [see] content that is permissible under the most restrictive regulations worldwide,” aided and abetted by Google.

“For the world’s biggest search engine to adopt such extreme measures would be a gross attack on freedom of information and internet freedom. In putting profits before human rights, Google would be setting a chilling precedent and handing the Chinese government a victory,” said Patrick Poon, China Researcher at Amnesty International, in a statement.

He added: “This also raises serious questions as to what safeguards Google is putting in place to protect users’ privacy. Would Google roll over and hand over personal data should the Chinese authorities request it?”

Oh, but wait! That’s a great question to ask Apple, too, because – in order to access that same dizzyingly large Chinese market – Apple recently acquiesced to Chinese government demands that it store all its Chinese cloud data in China, not in Apple’s own global cloud facilities.

And it turns out the Chinese facility is – but of course – state owned. And this cloud data is, in fact, the personal data on the Apple devices used by anyone in China. Previously, Apple already had installed a ‘feature’ in all iPhones that blocks the Taiwan flag on phones used within China.

Yes, that’s the same Apple that has made numerous statements about how much it values customers’ data privacy. In March, Apple chief executive Tim Cook declared that Apple placed user privacy over profit. And in the wake of the Cambridge Analytica/Facebook data leak scandal, he made a point of indirectly needling Facebook last June, noting to CNN that privacy “is one of these key civil liberties that define what it means to be an American”.

But – as Apple has now conceded, and supported, by its own actions – not what it means to be Chinese.