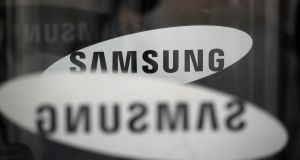 Chinese technology groups such as Xiaomi and Huawei are eating into Samsung’s position as the world’s largest smartphone-maker. Photograph: Reuters

Samsung has announced a $160 billion (€138bn) three-year investment in new technologies with the aim of ensuring profitability in the face of stiff competition from Chinese rivals.

The announcement came days after Samsung Electronics, the lucrative technology division of the South Korean conglomerate, reported its first drop in profits for seven quarters, raising investor concerns about its long-term trajectory.

On Wednesday the company spelt out its priorities. Samsung will, over the next three years, plough more than $22 billion into technologies including artificial intelligence, automotive electronics components and biopharmaceuticals. Samsung Electronics will account for the bulk of the spending.

The remaining $138 billion will go towards investment in crucial semiconductor and display manufacturing facilities, as well as fostering external start-up projects, creating up to 40,000 jobs in South Korea.

By far the country’s largest conglomerate, Samsung is a bulwark of the economy. Samsung Electronics alone accounts for almost 20 per cent of the value of the main Kospi Composite stock index, and last year it briefly moved ahead of Apple as the world’s most profitable technology company.

However, like its home nation, Samsung faces headwinds that do not bode well for growth. Chinese technology groups such as Xiaomi and Huawei are eating into Samsung’s position as the world’s largest smartphone-maker, while Beijing-backed companies are increasingly targeting Samsung’s mainstay memory chip business. – Copyright The Financial Times Limited 2018