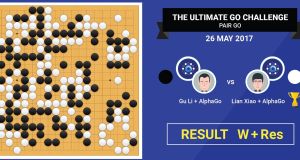 AI company DeepMind – acquired by Google in 2014 – made headlines last year when its neural network named AlphaGo beat a human player at the ancient Chinese strategic board game Go. AlphaGo has been trained to “think” and play games like a human, resulting in its victory over a professional human player for the first time.

After a year of improvements, Google has put AlphaGo to the test a second time by pitting it against Ke Jie (19), the world’s number one Go player. Jie was beaten by the AI in the first two games, leading him to remark upon its “godlike” nature as AlphaGo now becomes the top ranking Go player in the world.

DeepMind’s neural network also played other Go experts as part of the “Future of Go summit” in Wuzhen, China, where participants “explore[d] how Go’s best players and its most creative AI competitor can collaborate to uncover new mysteries about the ancient game”.