Five Irish firms in running for technology company of the year 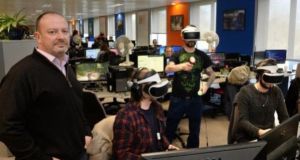 Five Irish companies are competing for the title of technology company of the year in Technology Ireland’s software industry awards.

Among the companies competing for Technology Company of the Year are Keywords Studios, Cora Systems, FINEOS Corporation, Fenergo and Sidero.

A total of 29 entries have been shortlisted across the various categories, with the winners announced at an event in the Mansion House in Dublin on November 22nd.

Keywords and Fenergo are also competing for an award for outstanding achievement in international growth, alongside Nutritics, learnUpon and Financial Risk Solutions.

Emerging Company of the Year will be chosen from eCOMM Merchant Solutions, ID-Pal Tracematics and Nova Leah.

Among the other awards are the WomenInTech Company Initiative of the Year, Digital Technology Services Project of the Year, Technology Innovation of the Year, Outstanding Academic Achievement and Excellence in Talent Development.

This is the 27th year of the awards, which are sponsored by EY Ireland, Bank of Ireland, Workhuman and Enterprise Ireland. Director of Technology Ireland Una Fitzpatrick said the awards reflected the growing technology sector in Ireland, and were going from strength to strength each year.

“Looking at this year’s awards entrants we can see the depth of quality and talent making this happen,” she said.

“More than 80 technology companies and organisations from across Ireland entered this year’s awards and it is the tireless efforts of all in these companies and beyond that have positioned Ireland into a global technology powerhouse.”

The companies that made the shortlist will present to eight independent judging panels, which include tech chief executives and founders of successful Irish companies.