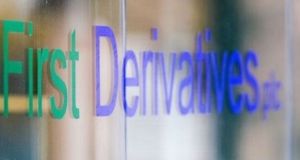 Newry-headquartered technology company First Derivatives said total revenue was 6 per cent ahead of last year in the four months to June 30th, despite the coronavirus pandemic that shut down many businesses and forced others into remote working.

The company, which holds its AGM on Wednesday, said managed services and consulting revenue was up 2 per cent up on the same period a year earlier as it saw continued benefit from the high visibility and repeat nature of its clients.

Some new projects had been deferred, as expected, but the financial impact of that had been offset partially by lower recruitment and cost management.

The group said software revenue rose 8 per cent, with growth in recurring licence and subscription revenue offset by a small decline in perpetual licence revenue as the closure of new software sales took longer in the current situation.

The board said it was encouraged by its performance, but reiterated it was too soon to determine the likely outcome for the full year.