Facebook continuing to hire for hundreds of roles in Ireland 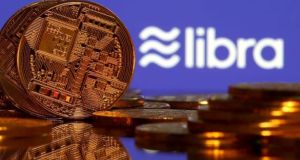 Facebook is still actively hiring for hundreds of roles in Ireland and intends to create 50 new jobs by the end of 2020 for its financial services subsidiary Calibra.

At a time when many businesses are cutting jobs due to the Covid-19 crisis, Facebook said its Irish operations remain “critically important” to the company and it plans to continue investing in Ireland.

The social media giant, which also owns Instagram and WhatsApp, first established operations in the Republic in 2009 with just 30 people. It now employs more than 5,000 people across Facebook and its partner companies.

In addition to its offices in Dublin, the company also has a data centre in Clonee, Co Meath, while its virtual reality subsidiary Oculus established a research lab in Cork in 2017.

Calibra, a company founded last year to develop a digital wallet for the Facebook-backed libra cryptocurrency project, has already assembled a small team in Dublin but now intends to expand this significantly.

The company, which secured an e-money licence from the Central Bank in 2016, plans to hire up to 50 people in various roles by the end of the year with some jobs already currently open for application. The pace of hiring depends in part on securing regulatory approval for the libra project.

“During this time of global uncertainty, we’re continuing to invest in our team located in Dublin. We’re actively hiring experts in fraud, compliance, workforce management and customer care to expand our operations team supporting the Calibra wallet,” said Laura Morgan Walsh, head of operations for the company.

The jobs announcement comes just days after a scaled-back plan for libra was announced, following significant pushback from regulators and the withdrawal of partners such as Vodafone, PayPal, Mastercard and Visa from the project.

Libra was originally envisaged as the basis of a new global financial system. However, the revamped plans sees it creating a more traditional digital payments system like PayPal.

The new jobs announcement also comes as the social giant reiterated its commitment to Ireland.

“Ireland is critically important to Facebook and plays a central role in our global operations. We have around 60 teams including engineers, safety and security experts, policy experts, marketing and sales people with a number of global and regional teams run from Ireland,” said Gareth Lambe, head of Facebook Ireland.

The company said given the current restrictions it was implementing ways to keep candidates and interviewers safe during the hiring process. This includes providing fully remote interviewing.