Apple given go-ahead to start €850m data centre in Athenry 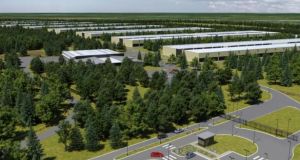 The project is expected to be the single biggest private-sector investment in Connacht.

The Commercial Court has cleared the way for tech giant Apple to develop a data hall in Athenry, Co Galway, the first phase of a planned €850 million development.

The judge noted Apple had recognised each hall was a “stand alone development” and the other seven data halls provided for in its “master plan” may or may not proceed in the future and were subject to “market demand”.

The reality is the other planned halls and associated grid connection will require planning permission and a further Environmental Impact Assessment (EIA), he said.

Rejecting arguments the data hall was a development that could only properly be considered as part of the overall master plan, he held the hall can operate on a standalone basis and can go ahead irrespective of future site proposals.

While An Bord Pleanála’s inspector had found the entire masterplan would have a “potentially material impact” in terms of increased overall CO emissions, and hence implications for climate change and Ireland’s ability to meet its greenhouse emission targets, the inspector considered the potential employment and regional development benefits of the centre outweighed potential adverse climate change impacts, the judge said.

The inspector had noted there is no national climate change policy regarding high energy consuming projects such as data centres, he added.

He dismissed the first challenge, by local residents Sinead Fitzpatrick and Allan Daly, of Lisheenkyle, Athenry, whose concerns included those about the potential environmental impact of the entire development, particularly concerning greenhouse gas emissions.

The judge found the board and its inspector had considered and assessed the potential environmental impact of the overall Apple “master plan” and said he was not satisfied, as the applicants contended, the board was required to carry out an EIA of the entire proposed project.

He found an appropriate EIA as carried out in accordance with national and European law and the purposes and principles of the relevant EIA directive.

The permission at issue concerned Phase 1, a 23,505sq m single-storey data hall, a logistics and administration centre, ancillary and associated works. The master plan for all phases of the data centre envisaged eight data halls in total plus other development, including an electricity subrstation and 144 standby diesel generators, to be built over 15 years.

He said the board’s inspector had considered the applicants had made a “strong” case in relation to their concerns about the projected increase in data storage demand and likely impact of a significant change in technology use.

The applicants also raised issues about the electricity demands required for eight data halls and alleged the board failed to properly assess the impact of the development on climate change.

While Apple indicated it used best technology and design to minimise energy usage, the inspector had noted no direct renewable energy connections or renewable energy projects were identified by Apple in its submissions, the judge said. The inspector was also not satisfied it could be clearly shown power to the data centre would be from 100 per cent renewable resources.

The inspector took the view the potential employment and regional development benefits of the centre outweighed potential adverse climate impacts.

The board had accepted the inspector’s findings and ultimate conclusion and recommendation the data hall could proceed and it was entitled to do so, he said.

The second case was by Brian McDonagh, Unit 1, Ballymount Cross Business Park, Dublin, who had said he “did not oppose Apple coming to Athenry” but wanted to ensure compliance with “proper planning procedures”.

The judge found Mr McDonagh lacked the necessary legal standing to challenge the board’s decision for reasons including he does not live close to the site and had not participated in the planning process.

He said Mr McDonagh should have disclosed that he was a director and shareholder of Ecologic Data Centre which had secured permission for a data centre on a Co Wicklow site considered as an alternative location for the proposed Apple development.

While Mr McDonagh had in late February 2017 affirmed his interest in the Co Wicklow centre, and asserted that gave him sufficient interest to bring his case, the court rejected that, the judge said. The court was satisfied there had been “significant non-disclosure and lack of candour” by Mr McDonagh, which had not been sufficiently explained, in his action in relation to his interest in challenging the development.

The tech giant first unveiled plans to build the centre in February 2015 on the same day it unveiled plans for another facility in Denmark. The Danish project has now been completed.

Apple has said it needs the Athenry centre to deal with the growth in demand for data processing and storage. It has described the planned facility as “a critical piece of infrastructure” needed to support global demand for storage.

More than 2,000 people staged a march in support of the centre in Athenry last November while local businesses in Co Galway had also expressed concern the project might get shelved, which would cost the region hundreds of jobs.

Some 300 jobs are forecast to be created over multiple phases of construction and ongoing employment in the operation of the centre with 150 technical staff to be employed on an ongoing basis.

The project is expected to be one of the biggest private-sector investment in Connacht to date.