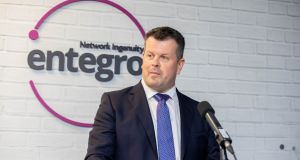 Telecommunications firm Entegro is to create an additional 50 jobs in Ireland in the coming year, as the company works to meet demand created by the contracts including the National Broadband Plan.

The Kilkenny-based company said it would also create 20 jobs in Poland as it seeks to establish a design support centre there to further its European expansion plans and help meet the global demand for digital networks services. The new hub is expected to be up and running in the coming months.

The company said the Irish jobs announced on Thursday are in addition to the 50 positions it said it would create in May. Recruitment is already underway for the jobs, which include fibre to the home design engineers, GIS Technicians, field surveyors and project managers.

Entegro won a contract to survey and design fibre optic networks across the Republic as part of the roll-out of the Government’s plan to bring high-speed internet access to more remote parts of the country. The company is also working on the Fibrus Northern Ireland project for the design and delivery of fibre infrastructure throughout the six counties.

It currently employs 150 people, with its Engineering team based at Entegro’s Centre of Excellence in Kilkenny city, and other staff located at offices in Dublin and Athlone.

“As a business, we are delighted to be involved in the delivery of such an ambitious and vital project as the National Broadband Plan. It will provide much-needed, future- proofed connectivity in rural Ireland,” said chief executive Jim Doyle.

“Through the NBI contract and ongoing work with existing clients such as Virgin Media IE, Siro, Fibrus NI, Cityfibre UK and Century Link US we are helping people to work remotely and we are sustaining jobs locally.”

The National Broadband Plan is expected to take up to seven years to complete, although the majority of homes will have access to the new network within the first three years.