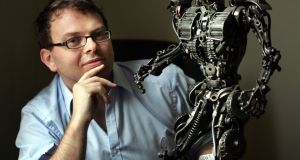 Dylan Collins of SuperAwesome which is aimed at children between six and 16, and has a number of channels across physical, digital and mobile. Photograph: Eric Luke

Irish technology entrepreneur Dylan Collins is said to be exploring a potential listing of his company SuperAwesome on the London Stock Exchange this year.

According to business-focused newspaper City AM, London-based SuperAwesome has engaged with several financial institutions in the UK, to explore an IPO (initial public offering).

A source close to the company told City AM the float could value the company at as much as £200 million (€230 million).

Aimed at children between six and 16, SuperAwesome has a number of channels across physical, digital and mobile.

Mr Collins said SuperAwesome is a “bridge” for brands to reach this new audience, which is immersed in technology from a young age.

The company has already attracted partners including firms such as Warner Bros, Lego, Mattel, Hasbro and Nintendo.

In 2014, SuperAwesome began its assault on the US market with the acquisition of mobile advertising network MobiGirl Media.

1 How safe is it to go back to the office?
2 Elderly parents living in property you own will save you on capital gains tax
3 More than 40% of help-to-buy recipients already had deposit
4 Most workers now expect choice to work from home part-time
5 Construction workers among first PTSB borrowers off payment breaks
Real news has value SUBSCRIBE