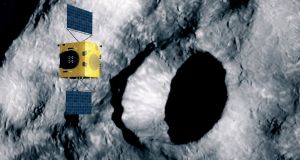 Hera will go alongside Nasa’s DART spacecraft, in what will be humankind’s first probe to rendezvous with a binary asteroid system called Didymos

Irish company InnaLabs is part of a consortium that has been awarded a €129.4 million contract to launch a satellite to support deep-space navigation.

Named after the Greek goddess of marriage, the European Space Agency’s Hera will go alongside Nasa’s Double Asteroid Redirect (DART) spacecraft, in what will be the first probe to rendezvous with a binary asteroid system called Didymos.

First, Nasa will crash its DART spacecraft into the smaller asteroid – known as Didymoon – after blasting off next year. Hera will follow in a later mission launching in October 2024 to map the resulting impact crater and measure the asteroid’s mass.

Hera will carry two miniature satellites onboard that will be able to fly close to the asteroid’s surface to carry out scientific studies, before touching down to carry out a post-impact survey.

InnaLabs, a Dublin-based developer and manufacturer of high-performance inertial sensors and systems for use in space, is part of the winning consortium chosen by the European Space Agency (ESA) for the Hera mission. Its Arietis-NS product, a high-performance gyroscope system intended for space applications, will form an integral part of the mission, which is led by German satellite manufacturer OHB.

The winning consortium consists of companies from 17 European member states.

InnaLabs chief executive John O’Leary said the inclusion of its technology in the mission was “an extremely proud moment” for the team.

Earlier this month another Irish company, Ubotica Technologies, was involved in another ESA-backed space mission.

The PhiSat-1, a satellite carrying out an experiment to demonstrate how on-board deep-learning technology can speed up the rate at which observation data is processed and transmitted to Earth, launched from French Guiana that included an artificial intelligence solution developed by Ubotica.

While it might seem at first glance a little unusual that Irish companies are working with the space agency, it is anything but. Since 2000, more than 80 Irish firms, including the likes of Arralis, Pilot Photonics, Radisens Diagnostics and Skytek, have secured ESA contracts exceeding €80 million in value.

1 In this strangest of recessions, what happens next for Ireland?
2 Chris Johns: Boohoo exposed on pay and conditions in digital economy
3 Hotel bookings collapse in wake of additional Covid restrictions
4 Should I switch bank now with Ulster Bank at risk of closing?
5 FBD changes wording of business insurance policies amid fight over virus payouts
Real news has value SUBSCRIBE