Earnings rose by 5% to just over $1bn 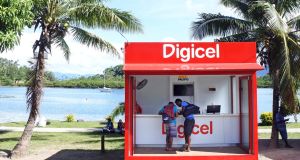 Denis O’Brien’s mobile phone group Digicel has told creditors it expects Covid-19 to have a “significant impact” on its figures for the current quarter, after reporting a 5 per cent increase in earnings for the year to March to just over $1 billion (€890 million), according to market sources.

It marked the first time the company, which operates across 31 markets in the Caribbean, Central America and Asia Pacific regions, posted an annual increase in earnings before interest, tax, depreciation and amortisation (ebitda) since 2014.

However, the company moved immediately after its financial year-end to restructure its then unsustainably high debt level of $7 billion, which led it to conclude a deal last week that saw bondholders write off $1.6 billion of what they are owed. The transaction involved the creditors swapping their bonds for securities of a lesser value and has been described by credit ratings agencies as a “distressed debt exchange”.

Digicel confirmed to bondholders as it reported full-year results and briefed them on a conference call on Thursday that the financial restructuring had cut its debt to 5.8 times ebitda from 7.3 times previously.

The company’s services revenues declined by 1 per cent to almost $2.2 billion in its latest financial year, including a $95 million hit from negative currency movements across some of its main markets against the dollar.

However, revenues increased by 1 per cent in its fourth quarter, compared with the three months to the end of December, marking a first quarterly increase since the period up to September 2015, just before Mr O’Brien abandoned an initial public offering (IPO) of the business after disagreeing with prospective investors on its valuation.

Mobile voice revenues rose 2 per cent on the quarter on an underlying basis, excluding currency movements. Data revenues increased by 8 per cent, while home entertainment and business solutions sales moved up 6 per cent and 8 per cent, respectively, according to the sources. A company spokesman declined to comment on the figures and bondholder call.

Digicel told bondholders it stands to receive a minimum of $90 million from French telecoms operator Orange, after a Paris appeals court confirmed last week that the latter engaged in anti-competitive practices in the French Caribbean.

While the award was for €250 million, this must be split with French phone company Buoygues Telecom, which sold its French West Indies business to Digicel in 2006. The final minimum amount will come to $90 million for Digicel, after French taxes are deducted.

Two categories of bondholders were offered, as an incentive to sign up to the deal, a total of $200 million of convertible notes in a new group holding company.

These bonds would be convertible into a 49 per cent stake in the empire if they remain outstanding three years after the debt restructuring.

Digicel and Mr O’Brien, who owns 99.9 per cent of the company, will be highly motivated to redeem these bonds in the interim, helped by the fact that the group will have a much lower debt pile as well as signs of a stabilisation in earnings – before Covid-19 struck.

1 Owner of Dundrum Town Centre to sell prized assets
2 Pilita Clark: Working from home is starting to pall
3 Thousands back petition demanding State aid for Aer Lingus
4 Google unveils ‘budget’ Pixel 4a after Covid delay
5 Can a first-time buyer get relief on a buy-to-let home?
Real news has value SUBSCRIBE