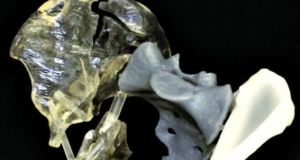 Axial 3D, which prints precise anatomical models from scans, was among the NI tech companies to secure funding last year

Investment in tech companies in the North jumped by over 50 per cent last year, new figures show.

Data published by Catalyst shows an increase in both the number of deals completed and the average value of each investment.

According to its NI Deal Tracker, £44.3 million(€49 million) in new share capital was invested as part of 61 deals in 55 companies. This marks a 54 per cent rise on the prior year when £28.8 million was raised in 51 deals across 49 companies.

Investment in Northern tech companies has increased substantially in recent years. In 2012, such companies only received a combined £4 million.

A breakdown of the figures shows 58 per cent of capital came from local sources with the number of deals in which there was at least one investor from outside Northern Ireland declining. Overall, almost £19 million of the total figure invested in companies came from outside the North.

The number of deals at the seed investment stage was unchanged from the previous year with 31 transactions. There was however a jump in the £1 million to £5 million funding range, with the number of deals in this category rising from six to 16 deals. There were no rounds over £5 million last year.

There was a 125 per cent increase in the number of companies receiving their first round of investment in 2019, due largely to the launch of the TechStart II seed fund in September and the establishment of the angel investment initiative HBAN in the north.

Only six of the 55 companies to receive investment last year were female-founded or led, the data shows.

Among the companies to receive significant funding in the North last year was Belfast-based medtech Axial 3D, which secured £2.4 million in investment.

Catalyst said given Covid-19 the investment outlook for 2020 is uncertain but will likely be slower than last year. However, it added there have been some notable funding rounds during lockdown. These include Re-Vana Therapeutics, which raised over $3 million from US funds and Qubis.