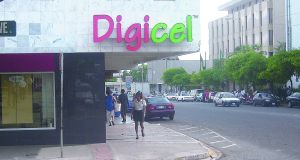 A Digicel outlet in Jamaica, where the company has completed a sale and leaseback deal on 451 tower sites.

Denis O’Brien’s Digicel Group has raised in the region of $90 million (€77.6 million) by entering into a sale and leaseback agreement for 451 of its wireless communication towers in Jamaica.

The arrangement means PTI assumes ownership and management of the tower sites. The necessary regulatory approvals and licences have been granted, it said.

Digicel is in the process of trying to ease its debt burden through a number of measures.

Credit ratings agency Fitch last month downgraded its stance on Digicel’s creditworthiness amid concerns about risks to the group’s ability to refinance debt that falls due in the next five years, unless its improves its debt ratios and delivers “sustainable” free cash flows.

“With similar agreements with PTI for sites in El Salvador and the French West Indies, this was the next natural step and we are delighted to be extending our partnership,” said Digicel Group chief executive Alex Matuschka.

“This move is consistent with our stated intent to divest non-strategic assets and focus on building our business for the future.”