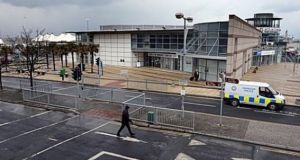 The developer behind a plan to transform the former ferry terminal in Dún Laoghaire Harbour into one of Europe’s largest technology campuses has withdrawn from the project after belatedly discovering that the owner of the building failed to secure the necessary foreshore licence to lease the building.

Philip Gannon received planning permission at the end of July to develop a 7,000 square metre digital hub at the former terminal that could support up to 1,000 jobs and 50 companies and bring in an estimated €6 million a year to Dún Laoghaire.

However, the developer has now terminated his lease on the ferry terminal building after it emerged that the Dún Laoghaire Harbour Company had failed to secure the licence to lease the building despite advertising it for lease two years ago.

The planned €20 million digital hub was expected to be home to companies working across technologies such as artificial intelligence, augmented and virtual reality, data analytics, the Internet of Things (IoT) , 5G and blockchain.

Mr Gannon said it was disappointing to learn that just seven weeks after receiving planning permission, the landlord did not actually have any legal right to lease the building.

“You would think that Dún Laoghaire Harbour Company (DLHC) would have taken care of such basic requirements before advertising the property in the first place,” said Mr Gannon.

“When I was told that the chief executive of DLHC was still trying to obtain the foreshore licence, I decided to cut my losses and pull the plug on Dún Laoghaire. I am now looking at other buildings in and around Dublin,” he added.

Mr Gannon said he spent more than 12 months negotiating the lease and experienced further delays due to time lost waiting for various certs and approvals to be granted.

Earlier this month, control of Dún Laoghaire Harbour Company was transitioned over to the council after local councillors unanimously voted to dissolve it. However, concerns have been voiced about the estimated €33.5 million of debt and annual maintenance costs of €800,000, which the council has been forced to assume as part of the transaction.

The ferry terminal has lain empty since the Stena Line ended its ferry service in 2014. The planned digital hub, which was expected to open early next year, was forecast to deliver almost €15 million in rent and rates to the council over the next decade.

The council said in a statement it was taken aback by news that Mr Gannon had withdrawn from the project.

It said approval in principle for the foreshore application was granted by the Department of Housing Planning and Environment on October 1st and had been forwarded on to the Chief States Solicitor’s Office for drafing.

“Clearly this is a very disappointing development,” the council said of Mr Gannon’s decision to walk away from the planned innovation campus.

“The council still supports the project and believes it can proceed at this location which would provide a transformative space for business and will also impact so positively on the town of Dun Laoghaire,” it said.

1 Why gift a son now if it eats into his tax-free inheritance threshold?
2 Can we finally say farewell to the scourge of hot-desking?
3 Irish pharma sector warns of protectionism as US corners supply
4 Mortgage arrears: Prevention is definitely better than cure
5 Limerick-born entrepreneur gets FDA approval for respiratory monitor
Real news has value SUBSCRIBE