More than 1.3 million people have already downloaded the tracker 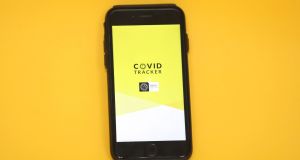 Ireland’s contact tracing app could soon be used to help deal with the coronavirus outbreak raging in the United States, with app developers in Nearform already beginning work with individual states.

Waterford-based Nearform, which developed the app for the Health Service Executive, confirmed that it is working with public health authorities in Pennsylvania to utilise the app.

It is understood there are other states that could follow Pennsylvania’s lead, and interest in the app has previously been expressed by other countries. Pennsylvania has more than 107,000 confirmed cases of coronavirus, and more than 7,000 deaths from the disease.

More than 1.3 million people have already downloaded Covid Tracker Ireland, making it the most successfully-adopted contact tracing app launch in the world.

However, there is still some way to go before the app itself can be declared a success. Just over a third of the adult population has already downloaded the software, but public health authorities will want to see that adoption continue to ensure the optimum coverage for the app.

Covid Tracker Ireland has already begun picking up its first cases, with the HSE confirming last week that it had picked up contacts that manual tracing had not.

Nearform is also working with Northern Ireland’s public health authorities to launch the contact tracing app there, ensuring cross-Border compatibility for the system. The company has also developed the app used in Gibraltar.

Earlier this week, the HSE confirmed the source code for the app had been donated to the Linux Foundation Public Health project, one of two that would be used to help fight the virus. Named Covid Green, the software will be used by other countries to build their own apps quickly using the Irish code as a base.

There have been questions raised about the effectiveness of contact tracing apps, particularly around the accuracy of Bluetooth in measuring distances. Privacy experts have also voiced their concerns over the data gathered by Google through its underlying Play Services system, which includes identifying data points and “fine-grained data” from other apps, including banking and dating apps.