Teckro to add 45 jobs in Dublin

New hires will be in engineering, data science, design and usability, quality and product management 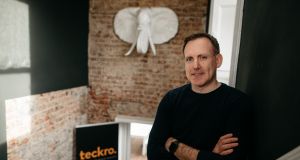 Teckro’s Gary Hughes: “People are attracted to a company where they can make a positive impact. Our products are very much focused on healthcare and new therapies.”

Life sciences tech company Teckro is adding 45 jobs in Dublin, doubling its current numbers in the city as it targets growth.

Teckro, which uses information retrieval and machine-learning technologies to help make clinical trials simpler and more transparent for doctors, researchers and patients, said it was hiring “aggressively” in the next three to six months.

The company is hiring for roles in engineering, data science, design and usability, quality and product management at its engineering excellence hub in Dublin’s Silicon Docks.

Dublin will play a pivotal role in the company’s expansion and broadening its product portfolio, Teckro’s Gary Hughes said.

“People are attracted to a company where they can make a positive impact,” Hughes said. “Our products are very much focused on healthcare and new therapies.”

The company, which raised $25 million in a Series C funding round earlier this year, previously said it planned to double its workforce to about 200 in 12 to 18 months. It employs 110 people around the world, and is focusing on the US and European markets.

“In some respects Teckro is still very early stage in terms of opportunities in the business,” Hughes said. “With this venture, we really want to build the biggest, most successful company we can.”

Minister for Business, Enterprise and Innovation Heather Humphreys welcomed the jobs. “It’s great to see an Irish company based in Dublin and Limerick succeed and grow internationally, especially one with a mission that will ultimately benefit patients and healthcare professionals in research to address global health problems,” she said.

“These 45 new tech jobs will play an important role for Teckro to deliver solutions from Ireland that will improve the clinical trial process throughout the world.”

The company was founded in 2015 by Gary and Nigel Hughes and Jacek Skrzypiec.

“It has been a crazy first six months in some respects, there’s been a lot going on ... building a team takes a lot of energy,” said Hughes. “In the second half of the year we will see the impact of the new hires.”