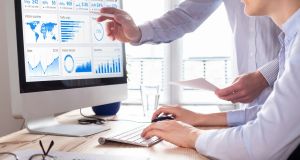 The pandemic has shifted the public focus to facts and figures, showing the strength of data analytics in Ireland. File photograph: Getty

When the first case of Covid-19 was diagnosed in Ireland at the end of February, the medical sector sprang into action.

Hospital beds were freed up, private hospitals were brought into the public system and elective treatments were postponed. There was a recruitment drive for the health sector, with trained staff returned from overseas to help battle the Covid-19 onslaught that seemed inevitable.

But behind the scenes, another sector was also gearing up: data analytics.

Since the pandemic began, there have been more than 67 million Covid-19 cases confirmed around the world, and more than 1.5 million people have died as a result of the disease. Ireland has had about 75,000 cases reported, with more than 2,000 deaths recorded.

With a couple of keystrokes, anyone can view how many people are in hospital receiving treatment for Covid, or are being treated in intensive care units. We know how many tests are being carried out each week, how many cases have been recorded in a particular electoral area in the past 14 days, what the gender split of the cases is and what age groups they are in.

But at the beginning of the pandemic, it was a very different scenario. Ireland’s first case was officially diagnosed on February 28th and made public a day later.

As Ireland began to see the number of cases climb, researchers at NUI Maynooth were already formulating a plan to help track it all.

Justin Gleeson is the director of the All-Island Research Observatory (AIRO) at NUI Maynooth. The research and consultancy unit specialises in socio-demographic analysis, spatial analysis (GIS), spatial planning and data analytics. Its usual projects would be in the areas of the economy, housing and the environment – census mapping, wind energy planning strategies, or working on policy briefings for the Western Development Commission on rural commutes.

The Covid hub was some way off, but the unit was already exploring how it could help. “At this point, there was literally no data coming through because this was brand new. There was no mechanisms for gathering the data, reporting it properly on a daily basis. Even getting this stuff structured at the start was a challenge,” says Gleeson.

“It was really just getting something together at the start, and then bouncing it over to [the Department of] Health to say, ‘here’s something that we think can help inform people of the numbers and the trajectory.’ This is a week into the data, so a couple of little curves here and there – absolutely tiny stuff. It was about forming that relationship with the Department of Health at that point.”

Initially, it was very straightforward: recording the number of cases. Hospitalisation and incidence rates weren’t a consideration.

And there were a number of hurdles to overcome, from governance of the data to protecting the privacy of those confirmed as positive to Covid-19.

“It was a complete new, blank canvas for identifying data and trying to gather it and see who the right source of it was, and then arrange this access to geohive and the Covid hub through all these very strong data protection agreements and data governance systems that had been set up,” says Gleeson.

That required collaboration, with AIRO, Ordnance Survey Ireland, the Central Statistics Office and the Department of Health, with ESRI Ireland providing technical support for the hub built using its GIS technology and platform.

“Once it got into operation, we then started to get some nice flows of data coming down and building confidence with the HSE that we were acting in a supporting role,” he says.

Since then, things have picked up pace. The Covid-19 hub has become the go-to information hub for anyone following the spread of the disease in Ireland. The hub in its current form began publishing the data in June, showing the cumulative totals of Covid-19 throughout the State. It was the first time the spread of the virus throughout the State was laid out in full. That was an area that got huge traction, says Gleeson.

“Even to get to that point was weeks and weeks of discussion about ‘was this the appropriate thing to do?’. People are calling out for this stuff, they want to see it, but it was about balancing that up – about public interest and confidentiality. Because the numbers are so low, in certain areas, there is always a potential then someone can identify themselves in the data.”

In September, the Covid-19 hub began publishing data on the real-time incidence of the disease by local electoral area.

“One of the reasons for moving from the cumulative figure was that it showed big things, but it’s like, when did these cases happen? If you’re talking about how many people across the country have got it,” says Gleeson. “It’s about informing, but also making people aware of what’s going on in their local local area, and so on. The attention has changed throughout this from March. To start with, it was just get the cases done and what are the key data sets for decision making.”

While there is the public hub we are all familiar with, AIRO also works on a internal hub for the epidemiological modelling advisory group, pulling in even more data

The pandemic has shifted the public focus to facts and figures, showing the strength of data analytics in Ireland. But Gleeson says the pandemic has facilitated the creation of the data hub in more ways than one.

“It has been interesting to see this level of expertise that would never have been seen before, prior to this whole thing. Everyone coming together as part of the remote working environment,” he says. “Now it’s easy to bring 30 people on to a call for an hour; prior to this, you’d never do it. It might be once a year at an annual conference. That’s been a big part in driving innovation and thought sharing.”

Covid-19 may have brought data analytics to the fore, but the industry has been building over the years. The industry in Ireland has potential. According to report by the Analytics Institute and supported by IDA Ireland, Ireland has the potential to be a global centre of excellence for data analytics – provided we are willing to put in the work.

“This sector is huge. Despite the pandemic, you’re still getting 15 per cent job growth this year. If you look at Ireland, we are really well positioned to take advantage of this.”

Ireland houses 25 per cent of Europe’s data in its growing number of data centres. Ireland also has the top players in the tech industry – Google, Facebook, Twitter, LinkedIn, Microsoft – along with a healthy start-up industry with companies such as Intercom, Newswhip and Boxever all located in Ireland.

“There are lots of highly innovative companies that are leveraging data to create new business value,” says Malone. “You have got a very supportive research environment looking at breaking new ground.”

The payoff, if it is achieved, could be huge. Figures in the report put the value of the global industry at €30 billion, and makes the case that data analytics could help drive the economy at a time when crisis hit industries could benefit from the efficiencies and other benefits that data analytics can bring.

The impact can be widespread. Analytics is no longer associated only with technology companies. According to data from LinkedIn, among those recruiting for data analysts are ICT, financial services, pharmaceuticals, banking and agriculture.

But there is one weak spot where Ireland may run into difficulty in building its reputation as an analytics powerhouse. It’s the often cited problem: skills.

Figures from HEAnet [National Education and Research Networks] show 2,720 students graduated from data analytics courses in 2019, but to keep up with demand, the interest in the sector will have to be nurtured.

“The industry is still suffering from a gap in terms of the staff resources they need,” says Malone. “We’re playing catch-up. We’ve got great masters programmes in DCU, UCD and NUIG. You can see brilliant kids coming out here, but we have to close the gap between students coming out of college and being work ready.”

That effort has already begun, with apprenticeships, post-graduate qualifications and other measures planned.

“They’re high-value jobs, they’re long-term jobs, so it will be worthwhile for the Government to invest heavily in education,” says Malone.