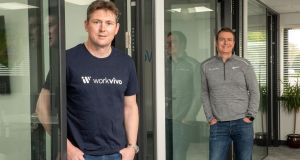 Irish employee communications software company WorkVivo has raised $16 million (€14.7 million) in fundraising to accelerate product development as it looks to surpass one million users in 2021.

US investment firm Tiger Global Management, which recently closed on a new $3.75 billion private-equity fund, led the Series A round with Dublin’s Frontline Ventures and Enterprise Ireland also participating.

New York-based Tiger, which was founded in 2001, has previously invested in a number of well-known companies, including Airbnb, Facebook, Spotify, Peleton, LinkedIn, Uber and Stripe, the online payments company founded by Limerick-born brothers Patrick and John Collison.

The investment brings total fundraising to date for WorkVivo to $17.5 million after the company last year raised €1.5 million in investment from backers that include Zoom founder and chief executive Eric Yuan.

Founded by John Goulding and Joe Lennon, three years ago, the Douglas-based company has developed an internal communications platform to increase employee engagement. Its customers include Cubic Telecom, Netgear and Telus International, the owner of Voxpro.

Mr Goulding, WorkVivo’s chief executive, said the recent widespread move to remote working on foot of the Covid-19 crisis, meant that it was more important than ever to be able to effectively communicate with employees.

“ Workvivo’s communication platform helps organisations connect and engage with their employees regardless of location, bringing the culture alive and aligning everybody with what the organisation is trying to achieve,” he said.

“We have experienced tremendous success to date and this funding will allow us to expand our reach significantly to help organisations across the globe, while also allowing us to continue to invest strongly in ongoing product development,” Mr Goulding added.

1 In six months we will be in the grip of a 1980s-style recession
2 Angela Merkel sweeps in to save the euro zone
3 Stocktake: Has Warren Buffett lost the magic touch?
4 Donohoe warns of cost of pandemic as budget deficit swells to €6.1 billion in May
5 Brother is dragging his heels as executor of uncle’s will - is there anything I can do?
Real news has value SUBSCRIBE