Investment is the fourth by state-backed BGF in the Republic 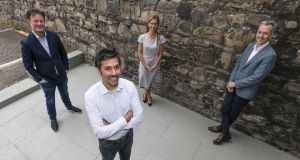 Dublin-based Edgescan was established in 2011 by Eoin Keary and Rahim Jina and provides cybersecurity intelligence, assessment and other services to companies in sectors such as media, financial services, healthcare and retail. It employs 57 staff.

Edgescan’s revenues have grown at a compound annual rate of 40 per cent since 2016 and the investment from BGF will be used to accelerate its international expansion and expedite new product development.

Former IBM senior executive Bernie Waldron has joined the company’s board as a non-executive chairman and is investing in the business alongside BGF.

“Having bootstrapped the company to date, we are delighted to have reached this milestone investment from BGF. We have ambitious plans to aggressively grow Edgescan with a focus on opportunities in North America, the UK and Europe, ” said Eoin Keary, the company’s chief executive.

The investment is the fourth made by BGF (formerly the Business Growth Fund) in the Republic. It took a stake in Donegal-headquartered nursing home operator Brindley Healthcare in return for a €10 million investment in January of last year.

In December, it invested €5 million to take a “significant minority stake” in aerospace and industrial engineering company Team Accessories Limited.

Last year it also invested €5 million in return for a minority stake in residential housebuilder Winterbrook.

The Government-backed Ireland Strategic Investment Fund, AIB, Bank of Ireland and Ulster Bank are all investors in BGF, which targets equity investments of between €1 million and €10 million. BGF only takes minority positions.

The firm launched a dedicated fund in the Republic in late 2017 with up to €250 million to invest in small and medium-sized enterprises. It is led by former IBI Corporate Finance executive Leo Casey. Mr Casey will join Edgescan’s board as will Maedhbh O’Driscoll of BGF .

“Despite the upheaval caused by Covid 19 we remain very confident about the Irish market and we are looking forward to investing in more ambitious Irish companies over the course of this year,” Mr Casey said.

1 If tourists are such pariahs should we not be testing them on arrival?
2 Belgium helps Ireland to a Brexit boon
3 ‘My rent here is so low it’s a joke’
4 WeWork on track for profits in 2021, says chairman
5 Varadkar to meet banks in row over interest on mortgage payment breaks
Real news has value SUBSCRIBE