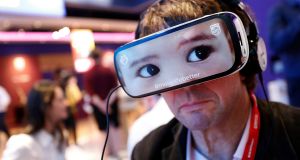 A man tries a set of virtual reality goggles at the Philips stand at the IFA tech fair in Berlin. Photograph: Felipe Trueba/EPA 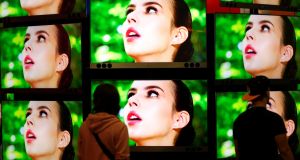 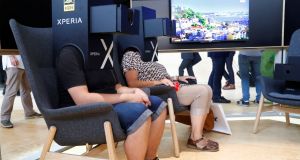 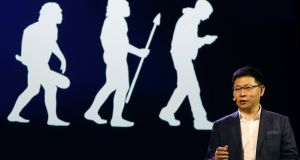 For 93 years, the IFA has been Europe’s largest tech show, promising tomorrow’s innovations today to a quarter of a million people who flock to Berlin’s trade fair.

But each year is a struggle against competitor events such as CES in Las Vegas, not to mention the growing preference of prominent absentees such as Apple for their own product launch events, with no distractions.

Small wonder, then, that IFA has begun to shift from its previously narrow tech focus – it started as a radio show – to embrace the smart home of talking fridges and high-tech ovens.

Given that, it was appropriate that the buzziest item on display was the “Dialogue”, a high-end oven from Miele that uses electromagnetic waves to cook without heat

Other popular household devices included Miele’s robot vacuum cleaner: the Scout RX2 Home Vision. When you are out, you can use an app to remotely activate its built-in surveillance camera to see what’s going on at home.

Liebherr has had a similar idea for its newest fridges: cameras inside the device so you can see in the supermarket whether you need to get butter. The tech industry has not managed yet to deliver its promise of the paperless office, but maybe the shopping list’s days are numbered.

Back in the traditional tech halls, there was buzz about Huawei’s new smartphone chip to boost the heavy lifting required to process artificial intelligence tasks from real-time language translation or augmented reality.

On the virtual/augmented reality front, the Microsoft booth enjoyed the longest queues for its Windows Mixed Reality system, a fancy name for its own virtual-reality system to compete with Oculus Rift and HTC’s Vive.

While Microsoft provides the software back end, manufacturers from Acer to Lenovo demonstrated their own hardware. Donning a headset and taking two controllers in your hand, you can tidy up your Windows desktop (geekily addictive for anyone avoiding tidying up their desk) or have a go at a Star Wars lightsabre duel in Jedi Challenges.

With the competition moving quickly to cut their prices, Microsoft is determined to make its platform the VR/AR standard, and the rush of manufacturers to the market next month with devices from $299 suggests it might just win the Christmas battle. Already 100 VR titles are available and the system allows you watch videos in 3D, 360°, 4k quality.

For anyone who has tried VR/AR and found the experience – smartphone in a headset blasting your eyes – a tiring affair, German lens specialist Zeiss has the answer.

Its VR One headset adds two special lenses to offer a better image that is less confusing for your brain, less exhausting for your eyes and eliminates the need to adjust for shortsighted or longsighted users. The Germans have hooked up with the SteamVR system, used by HTC Vive.

Away from the big players, the IFA “Next” hall was a real treat for anyone looking for new, original ideas instead of half-baked me-too products.

One firm likely to do well is Berlin-based company Bonaverde and its coffee machine that doesn’t just grind and brew: it roasts the beans as well.

Three machines, starting from €799, allow you to customise each cup of coffee and open the door to what Bonaverde hope will be a new coffee model of direct connections to coffee growers.

“Roasted coffee lasts six weeks, unroasted green coffee beans a year,” said Kike, demonstrating a machine. “We want people to have a deep coffee experience, even if they don’t have a roaster nearby.”

Bonaverde’s business model has a whiff of the Nespresso prison about it, locking you into buying their coffee beans in their filters, with QR codes to activate the machine. Then there is the other problem: coffee aficionados would never use use freshly-roasted beans to make coffee. But, still, an interesting first step.

Another winner was Swiss start-up Andi, offering stylish, wireless charging systems for iPhone and Galaxy phones. From desktop chargers to in-car systems, all with magnetic contacts, you’ll never need that elusive cable again. They even offer slim cases for the most popular phones.

A clever idea was the Proteccard, a multi-functional holder for your credit card. Its metal case protects against contactless payment scams. And, thanks to an inbuilt Bluetooth transmitter, sends you a message if the card is removed from the holder or – even worse – if your wallet leaves a predetermined radius. If you’re prone to leaving your wallet behind, or know the pain of having your credit cards stolen, Proteccard – available online – is a smart solution.

“Everyone talks of mobile phone payments but the credit card will be with us for some time to come,” said inventor Thierry Bride. “Everyone asked me to create an intelligent wallet and, strangely, it hasn’t existed until now.”

In a sea of today’s tech products, and tomorrow’s land fill, the cutest device at the IFA was “My Fabulous Storyteller”. A turquoise box of tricks from French company Lunii, it has four knobs and lots of high-tech magic inside for three- to seven-year-olds. Turning the knob, they select a hero, a place, a sidekick and an object. Then the box begins to tell a story based on their parameters.

Some 48 stories are built in, written and read by professional writers and actors, and you can upgrade the story selection by hooking up the device to your computer. Think of it as choose-your-own-adventure for the tablet generation, a clever Christmas (sorry!) gift idea for €59.

“We sold 40,000 in our first year in France – people like our idea of activating children’s imagination,” said co-founder Igor Krinbarg.

As another IFA closes its doors, the Berlin trade show remains the goose that lays golden eggs for the German capital. With 1,800 exhibitors and staff filling hotel beds and restaurants, not to mention the economic boost from visitors, the irony of the IFA circus is to stage an innovation show in a chaotic and confusing trade fair that is trapped in the 1980s. From hall fit-out to food kiosks, Berlin’s trade fair is in desperate need of a facelift.