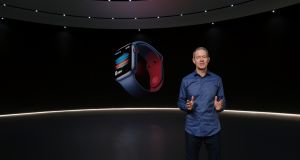 Apple has unveiled two new smartwatches and a new fitness service for Apple Watch users, in a virtual event from its US headquarters.

The company also updated its iPad line, announcing a new iPad Air and the eighth generation iPad with a new A12 Bionic chip that the company said was 40 per cent faster central processing unit (CPU) and offered a two times jump in graphics for users.

The launch of two new Apple Watches had been widely expected, with the company flagging the event last week by sending out invites with the line “Time Flies”.

The tech giant showed off the Apple Watch Series 6, which includes a faster chip and a new sensor to measure blood oxygen levels from your wrist, a metric that has increasing relevance in the current pandemic.

For the first time Apple also added a new cheaper model, dubbed the Apple Watch SE, and said it would continue to offer the Series 3 for sale, widening the available range to three models.

“Apple watch revolutionised what a watch can do. If you think about it, for over a hundred years the traditional watch really focused on just one thing – time,” said Apple chief executive Tim Cook. “Today it’s incredible what Apple watch enables you to do right from your wrist.”

The Series 6 device will be 20 per cent faster than its predecessor, and includes all the features previously offered, including ECG, SOS alerts and fall detection. The always-on display from the Series 5 has been improved, making it more visible in strong sunlight without waking the screen. The Series 6 also comes with a an always-on altimeter that provides real-time elevation, allowing for the detection of small elevation changes above ground level.

The Apple Watch SE is targetting a more price conscious consumer, keeping features such as the larger screen of the new devices, and adding some of the newer features seen in the Series 6 watch.

“It has everything you need to stay connected, be more connected and keep an eye on your health,” said Mr Williams.

The new watch includes a larger display, and contain’s Apple’s S5 chip, making it twice as fast as the Series 3 devices. There are also cellular version available, and the Watch SE has the same accelerometer, gyroscope, compass and altimeter as the Series 6.

The new watch could also be viewed as Apple’s attempt to capture the younger market, with a new Family Setup feature in Watch OS 7 that allows family members to set up an Apple Watch for someone who does not own an iPhone. However, Family Setup is only available in a select number of countries, and Ireland is not currently on the list.

The Apple Watch Series 6 and Watch SE will be available from Friday.

The company has also entered the fitness app sector, with Fitness+. It links up with the Apple Watch and offers immersive studio workouts that include everything from cardio to yoga, putting it in competition with existing services such as Fiit and Centr.

Apple is offering the new service to Apple Watch buyers for three months free of charge, and is also bundling it in as part of its new Apple One subscription service that offers a range of Apple services such as Music and Arcade for one monthly payment.

The company also showed off an updated iPad range, including a redesigned iPad Air that includes the smallest fingerprint sensor that the company has ever developed, a 10.9 inch display, powered by the new A14 Bionic chip. It also includes a USB C connection for faster data transfer.

Mr Cook said the company was updating its entire full size iPad line, introducing the eighth generation iPad with a faster chip. The updated A12 chip also brings the neural engine to the regular iPad for the first time.

More than 500 million iPads have been sold since the first device was shipped 10 years ago.

1 Three Ireland switches on 5G network around the country
2 Harry Crosbie puts family haulage business into liquidation after port dispute
3 Am I paying too much for my buy-to-let mortgage?
4 Mortgage breaks will not be extended beyond this week
5 Should I switch bank now with Ulster Bank at risk of closing?
Real news has value SUBSCRIBE