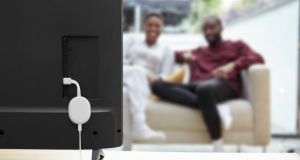 Google gave its Chromecast device an overhaul in September last year, giving it a new design, some new software and a remote control.

Apple and Google have teamed up to make the Apple TV app, which includes the TV+ streaming service, available to the Chromecast with Google TV, which the tech giant released last year. More Google TV devices will follow, the company has said.

The service will still require a subscription to Apple TV+, but that brings access to original content such as Ted Lasso, The Morning Show, For All Mankind and Servant. Subscriptions can be shared with up to six family members as part of Apple’s Family Sharing feature.

Google gave its Chromecast device an overhaul in September last year, giving it a new design, some new software and a remote control. It came with the new Google TV interface, which allows users to download apps for services such as Netflix, Disney+ and Prime Video, and access their subscriptions independently of their smartphone or laptop.

The Apple TV app can be found under the Apps tab in the Google TV interface, or on the apps row in the “For you” tab. Features on the way for Google TV users here include Apple Originals being included in your personalised recommendations and search results, and voice control through Google Assistant.

The Apple TV app is also coming to Google TVs made by Sony and TCL, with plans to expand that to other Android TV-powered devices in the coming months.