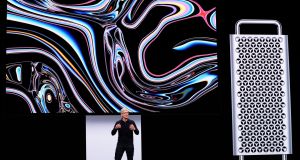 Apple took aim at Facebook and Google with new privacy tools, and at Netflix with a new personalised TV app, in a wide-ranging keynote address at its annual developer conference that also marked the demise of iTunes.

The iPhone maker’s event in San Jose offered a fresh glimpse at Apple’s ambitions in healthcare, augmented reality, wearable devices and artificial intelligence, as well as its long-running objective to turn the iPad into a more viable laptop alternative.

Updates to Apple’s iPhone, iPad, Watch and Mac operating systems will be released to consumers later in the year.

Apple also continued its recent push to command ever-higher prices for its products, with a new Mac Pro desktop and screen bundle that costs almost $12,000, including $999 for a monitor stand.

This year’s Worldwide Developers Conference comes at a time when Apple’s services business has achieved elevated prominence. Investors are looking to apps and media services as a new growth engine while iPhone sales wane, and regulators weigh complaints that Apple has stifled competition within its App Store.

“WWDC underlined the importance of Apple’s services, not just as a new source of revenue growth and diversification, but as the glue that binds the Apple ecosystem and generates demand across product lines,” said Geoff Blaber, analyst at CCS Insight. “There is little doubt the company sees its future anchored around security and privacy as a key differentiator but the event may be remembered as the day Apple unveiled a $12,000 Mac.”

Apple’s decision to replace iTunes with three separate entertainment apps for music, videos and podcasts marks the end of an era for one of the tech industry’s most transformative products. First introduced 18 years ago as a way to “rip, mix and burn” CDs and load them on to its iPod portable music player, iTunes’ 99-cent song downloads dragged the entertainment business into the digital era.

After unveiling a new video streaming service earlier this year, Apple is now intensifying its rivalry with Netflix, with more personalised recommendations for television shows and movies for its Apple TV box. The TV accessory will also support the same video games controllers used with Sony’s PlayStation and Microsoft’s Xbox, as it prepares for the launch of its new Apple Arcade service later this year.

Google and Facebook, which have become a familiar target for Mr Cook’s broadsides over alleged privacy abuses, are finding it ever more difficult to gather data on iPhones – a trend that is set to continue with the next version of iOS.

Apple also said it would tighten up location-tracking by apps, allowing users more granular permissions and limiting the ability to infer a device location based on nearby wireless networks.

Monday’s keynote introduced “Sign in with Apple”, enabling users to sign in to various apps without using rival programmes from Facebook and Google. This gives users the option of hiding their email address and instead be assigned a random email address that will auto-forward to the user’s real email address.

Apple also introduced the HomeKit Secure Video for security cameras used at home. Video footage would be uploaded securely, “where no one – not even Apple – will be able to see it”, said Mr Federighi. The product comes as another privacy challenge to Google and specifically its Nest cameras.

But in one key area – mapping – Apple’s announcements showed just how far it has to go to catch up with Google.

An overhauled Apple Maps will include “significant new detail’ from hundreds of cars and planes outfitted with cameras and lidar, which measures the distance to a target by illuminating the target with a pulsed laser light. It will be rolled out across the US by the end of 2019.

The new Maps also includes the ability to view on-the-ground images, then travel street-by-street smoothly, as if following a parade - something Google Maps’ Street View has offered for more than a decade.

The conference saw a series of additions to the Apple Watch, including a standalone App Store for the wearable device and menstrual cycle tracking software, demonstrated by WatchOS program lead Haley Allen.

Apple was criticised when it first launched the health app without cycle tracking, but the release also drew out sensitivities over the display of the information.

Watch users will also be shown their personal “activity trends” and sent a warning if their environment is so loud that it might damage their hearing, as part of Apple’s broader push into health and fitness tracking.

A series of changes to the look, layout and controls of the iPad’s operating system took it several steps closer to what many analysts see as its inevitable merger with the venerable MacOS used on desktops and laptops.

The new iPadOS marks the first time that Apple’s tablet software has diverged substantially from the iPhone’s operating system.

Mac users can now use their iPad as a second screen for their desktop or laptop, using a new app called Sidecar. Users could already do this with third-party apps such as Duet Display - another example of how Apple is increasingly finding itself in competition with even small, independent developers on its App Store.

Hardware updates for the Mac Pro earned the applause of developers but deliver a minimal impact on Apple’s business. Video editing and processing capacity were among the upgrades for what was described as “the most powerful Mac Pro ever made”, as well as a cooling system for the hard drive.

The starting price for the new Mac Pro will be $5,999, with the display cost at $4,999 and the cost of the stand at $999 - tipping the total new hardware costs easily into the five-figure bracket.

The announcement of the price of the stand drew more murmurs than cheers from the audience of devotees.

Security: Find My and Activation Lock

A new version of Apple’s software for locating lost devices, now called “Find My”, uses other people’s iPhones to pinpoint the location of a MacBook, even if it is not connected to WiFi.

The novel system works using a network of Bluetooth wireless beacons meshed across hundreds of millions of iPhones, which Apple said is “encrypted and anonymous”.

Apple also brought the iPhone’s Activation Lock security feature to Macs. “We are making your Mac less attractive to thieves. . . If your Mac is stolen, the thief will find it useless,” said Mr Federighi.

Apple expanded its toolkit for developers making augmented reality apps with a new platform called RealityKit. The software will let app makers create photo-realistic digital objects that can then be positioned in the real world, as viewed through an iPhone’s camera viewfinder. The system could help to pave the way for Apple’s widely expected AR smart glasses.

To showcase the new tools, Microsoft-owned games developer Mojang showed off its forthcoming AR game, Minecraft Earth, on stage at the event.