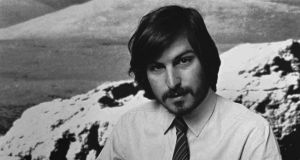 Steve Jobs prized secrecy from his executives and employees during his tenure at Apple. Now his top lieutenants are speaking out – to help shape the legacy of the company’s co-founder.

Through interviews and tweets, Apple brass, including the chief executive, Tim Cook, are throwing their weight behind a new unauthorised biography, Becoming Steve Jobs, which went on sale on Tuesday.

In the book, executives take aim at another title, Steve Jobs by Walter Isaacson, an authorised biography published shortly after Jobs’s death in 2011.

Isaacson’s bestseller did a “tremendous disservice” to the Apple chief, Cook said in the new book, written by Brent Schlender and Rick Tetzeli, and excerpted in the April issue of Fast Company magazine.

“It didn’t capture the person,” Cook said. “The person I read about there is somebody I would never have wanted to work with over all this time.”

“My regard couldn’t be any lower” for the book, he said, noting that he had read only parts of it.

Eddy Cue, Apple’s chief of software and internet services, endorsed the new book on Jobs in a tweet last week: “Best portrayal is about to be released – Becoming Steve Jobs (book). Well done and first to get it right.” Apple’s iBooks account also tweeted last week that Becoming Steve Jobs is the only book about Steve recommended by the people who knew him best.

The book-on-book criticism is a rare public cavalcade from Apple executives, who under Jobs kept quiet about the company’s activities. It shows the lengths that Apple is going in its effort to reshape the posthumous image of Jobs as a kinder spirit, rather than a one-dimensional mercurial and brash chief.

To that end, Apple gave the authors of Becoming Steve Jobs interviews with four executives, including Cook.

In another sign of the company’s implicit approval of the biography, the writers will discuss the book and field questions about it today at the Apple store in Soho in New York.

Apple’s cooperation wasn’t easily won, Schlender and Tetzeli said in an email interview. When the veteran tech journalists first approached the company about the book in 2012, both were told executives would not give any interviews. Apple changed its mind 18 months later, they said.

“I think our patience and quiet perseverance was what eventually won them over,” said Schlender, who covered Jobs for almost 25 years.

He said he wanted to write the book because he felt there was a side of Jobs’s personality that had never been captured by journalists.

While the authors fact-checked portions of the book with Apple and other sources, and showed the finished volume to the company, Apple wasn’t allowed to have “any editorial input whatsoever”, Tetzeli said.

“After a long period of reflection following Steve’s death, we felt a sense of responsibility to say more about the Steve we knew,” Steve Dowling, an Apple spokesman, said.

A handful of influential tech bloggers received early copies of the book, including John Gruber, who wrote on his website Daring Fireball that the book was “smart, accurate, informative, insightful and at times, utterly heartbreaking”.

Philip Elmer-DeWitt, a Fortune writer, said in a blog post that Schlender’s long relationship with Jobs helped distinguish the new book from past titles about the Apple chief.

“It’s through Schlender’s stories, freshly told, often from taped interviews, that we get to know Steve Jobs as Schlender knew him,” Elmer-DeWitt wrote.

In an interview, Isaacson, chief executive of the Aspen Institute and a former managing editor of Time, said he had tried to take a balanced view of Jobs that did not sugarcoat the Apple co-founder’s flaws. He interviewed Jobs more than 40 times and spoke to more than 100 of his friends, relatives, rivals and colleagues, including Cook, Ive and Cue.

In the introduction to Steve Jobs, Isaacson wrote that Jobs, who had handpicked him as biographer, didn’t try to exert any control over the book, except for weighing in on the cover. The biography proved enormously popular, selling more than three million copies in the United States alone.

sed at times for being too soft on his subject.

Isaacson said he was pleased to see more biographies and movies – a documentary on Jobs recently debuted at the South by Southwest (SXSW) festival, and a biopic featuring Irish actor Michael Fassbender as Jobs is also in the works – that would help the public’s understanding of Apple’s former leader.

“It’s really cool that there are other books coming out by people who knew Steve and where those who really loved him can put forth their views, because that’s how history is made,” he said.

Apple’s active participation in Becoming Steve Jobs is also another sign of how Cook has shaped the company into one that is more open and vocal. Over the past six months, Apple executives have been on an extensive media campaign to promote new retail stores, the Apple Watch and Apple Pay, a new mobile payment service.

Cook has not been shy about defending Apple’s image, either.

“Jobs was a mastermind at controlling the narrative on Apple and one of the ways he did that was to make sure that he was the sole spokesperson and that officially, at least, the company stayed above all the fracas,” Kane said.

She added that Cook’s critical comment ended up being used for the cover of her book by overseas publishers.

Becoming Steve Jobs paints him as a caring mentor, as well as a delegator and skilful manager who brought the best out of his team.

In the Fast Company excerpt, Cook told a story of what happened after he learned that Jobs needed a liver transplant in 2009. When Cook discovered that he and Jobs shared the same rare blood type, Cook offered a part of his liver to his ailing friend.

“Somebody that’s selfish,” Cook continued, “doesn’t reply like that.”

Later in the excerpt, Cue of Apple noted that in Jobs’s final years, the Apple chief did everything he could to have people treat him as if he were not sick.

“You could see it in the meetings; he was taking morphine, and you could see he was in pain, but he was still interested,” Cue said.

Of course, endorsements from corporate executives hardly ensure that the book will be popular.

The publisher of Becoming Steve Jobs, the Crown Publishing Group, is promoting the book as the first account to get the story right, calling it “the definitive history”. Crown has increased the print run to 85,000 copies from a planned first printing of 40,000.

Roger Scholl, the vice president and executive editor of Crown Publishing, said the market for Steve Jobs books was not close to saturated.

“He led such a rich and full life, there’s more to be done on him,” he said.

1 Spare me the city-dweller’s longing for a rural idyll
2 MSD buys Takeda biologics plant in Dunboyne
3 Irish company insolvencies expected to spike near crisis level of 1,700 next year
4 Data centres will force State to choose between climate and investment
5 Ireland v the rest of the world: Do we pay too much tax?
Real news has value SUBSCRIBE