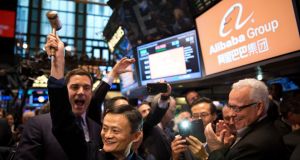 Jack Ma, founder of the Alibaba Group, at the New York Stock Exchange for the Chinese ecommerce giant’s initial public offering in 2014

The online retailer is in discussions with other investment banks seeking a role on the offering, they say, with plans to file a formal listing application with the Hong Kong stock exchange as soon as the next few weeks.

The offering could raise as much as $20 billion (€22 billion), though Alibaba hasn’t finalized a precise fundraising target, the people said. A deal that size would be Hong Kong’s largest share sale since 2010. The transaction could bolster the city’s status as a destination for Chinese tech listings and boost Alibaba’s cash pile as it wages a costly war of subsidies with Meituan Dianping in food delivery and travel.

Alibaba will seek to preserve its existing governance structure, where a partnership of top executives has rights including the ability to nominate a majority of board members, one of the people said. Under new rules for secondary listings introduced by the Hong Kong bourse last year, the company can apply for an exemption to standard restrictions in the city that would bar that kind of setup.

Credit Suisse was the left-lead bank on Alibaba’s 2014 US IPO, which raised a record $25 billion. Alibaba also has an existing relationship with CICC, once dubbed “the Goldman Sachs of China” for its work bringing some of the country’s biggest state-run firms to market. It owns 11.7 per cent of CICC’s Hong Kong-traded shares, making Alibaba the second-biggest holder. – Bloomberg