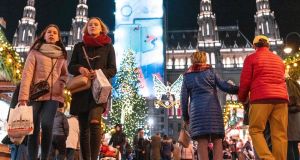 Visitors explore a Christmas market in Vienna: Corporate travel platform Tripactions is limbering up for a major assault on the European market. Photograph: Joe Klamar/AFP via Getty Images

Tripactions, a $4 billion corporate travel platform based in the United States, is limbering up for a major assault on the European market, targeting cities including Dublin and Berlin from its London sales base.

The company has chosen to locate its European headquarters in Amsterdam over rival tech hubs such as Dublin, however, because the Dutch city is already home to a cluster of travel companies with which it does business.

“Yes we looked at Ireland [as a potential location for its EU hub] ,” said Ariel Cohen, the company’s co-founder and chief executive. “But we didn’t make our decision based upon tax reasons or anything like that. There are a lot of travel companies such as Booking. com and KLM already headquartered in Amsterdam. We were attracted to that travel company cluster.”

Speaking at businessman Paddy Cosgrave’s Web Summit event in Lisbon earlier this month, Cohen confirmed that Tripactions is targeting several potential clients based in Dublin as part of its European drive, including a slew of international tech companies based in the city.

Its Irish-based customers already include Survey Monkey and Dropbox, US technology companies which have their EU headquarters here.

Tripactions operates a tech platform that allows companies and their staff to manage corporate travel efficiently. It announced a new partnership with Lufthansa during Web Summit as part of its push for business in Europe.

The four-year-old Californian tech unicorn was valued at $4 billion in a $250 million fund-raising in June that was backed by tech funders including Lightspeed Venture Partners, which was an early backer of Irish company, PCH International.

Tripactions claims companies that sign up to its corporate travel booking platform can save about a third on their hotel costs alone.

The system, which sucks in its travel inventory from scores of airlines, travel agents and major platforms such as Priceline and Agoda, uses machine learning to suggest the most suitable travel arrangements for users.

“In that way we’re very much like Netflix, ” said Cohen. “We show you the flights and the hotel that we think you will choose.”

Its features also include calculating carbon emissions of travel to facilitate accurate offsetting, and a function that shows staff who are booking a company trip what the median cost for similar travel is in the market.

“Do you want to be a good employee? Then you can book something for below the median rate,” joked Cohen.

“For chief executives, the cost of corporate travel is usually the second or third line item in their operational expenditure. We give managers the knobs and dials to scale that expenditure up and down.”

Tripactions, which is headquartered in Palo Alto, now has nine offices globally and 1,000 staff, including about 100 workers at its European base in Amsterdam. Cohen said the business is expanding through the hiring of about 100 new staff members each month. It has 3,000 corporate clients.

“We are growing at fives times annually,” said Cohen. “Most of our growth has been in the US so far. Now we are looking at Europe, where we already have 150 customers. We know there is a big opportunity here.”