Taxi regulation, the costs of going to college, and Trump and the free press 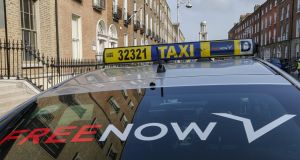 A Government TD has called for a State investigation after taxi app Free Now missed yet another driver payment deadline - its fourth in two weeks. Photograph: Crispin Rodwell for the Irish Times

Government TD Cormac Devlin, a Fianna Fail TD for Dun Laoghaire, has called for a State investigation after taxi app Free Now missed yet another driver payment deadline - its fourth in two weeks - leaving up to 14,000 taxi drivers unpaid for fares, with the cash owed to some full-time drivers estimated at up to €1,000 each. Mark Paul has the details.

US multinational Keurig Dr Pepper has been granted planning permission by Kildare County Council for a €2 million expansion to a former Lidl distribution warehouse in Newbridge, Co Kildare. Senan Hogan has the details.

Sajid Javid has taken up a role at JPMorgan, the bank where he started his career, six months after quitting as UK chancellor, reports the Financial Times.

Ryanair’s decision to cut its capacity by 20 per cent for September and October, neatly sums up the many challenges facing airlines as coronavirus infection rates fluctuate across Europe, according to Cantillon.

In personal finance, Joanne Hunt looks at the costs of third-level education and finds that the pandemic has changed the calculations for many students seeking grants.

In media and marketing, Laura Slattery looks at how the media has fared over the past four years of President Donald Trump and concludes that the role of a free press can no longer be taken for granted.

In Q&A, a reader wonders if they should buy an investment property or save up for their dream home. Dominic Coyle provides some advice.

In Me & My Money, Louisa Meehan, president of Network Ireland, tells how her best investment was a house in Sligo . . . with a tree inside. Tony Clayton-Lea has the story.