App promised drivers unpaid fares would be processed ‘over the weekend’ 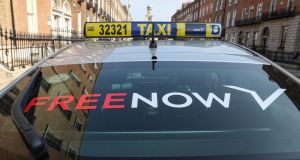 Free Now, the taxi app that has signed up 14,000 drivers in the Republic, still has not passed on fares due to Irish taxi drivers, after promising last Friday that they would be paid “over the weekend”.

It is the fourth missed payment deadline by Free Now in two weeks, prompting serious concerns from many taxi drivers over the issue.

On Friday, Free Now responded to concerns raised by drivers by blaming a “technical problem” at a third-party supplier of payment services to the company, which it insisted was the source of the delays. Free Now said the issue was being resolved, and that it was also putting in place a “contingency plan internally” to handle payments, in case its payments supplier failed again.

“We appreciate that this is unacceptable and thank drivers for their patience,” it said on Friday.

The delays mean drivers have not been paid for two weeks for any credit or debit card fares booked through the app; most passengers now eschew cash in favour of contactless payments. Card payments are usually passed on to the drivers once a week, minus the app’s commission of about 15 per cent.

Free Now is owned by German car marques, BMW and Daimler. Local reports in Germany suggest taxi apps there have been hit by the recent collapse of financial technology provider Wirecard, which folded in the summer with a near €2 billion hole in its balance sheet.

Free Now’s terms and conditions in Ireland list Wirecard as one of its payment processors. The company on Friday made no response to questions about whether Wirecard is the source of the payment delays in the Republic.

Drivers were told over the weekend directly by the Irish branch of the German-owned app that they would have the money in their accounts on Monday morning, but so far they have not yet been paid.

Free Now said the drivers would be paid “as soon as possible”.

1 Basic income for all: Has the Covid crisis given us a new economic model?
2 Direct sea routes to Europe offer certainty in choppy Brexit waters
3 ‘I don’t need to do any of this. . .I don’t actually need to work.’
4 Admission of mistake in Oxford vaccine dose raises doubts over reliability
5 Only way is up for Stripe as valuation skyrockets
Real news has value SUBSCRIBE