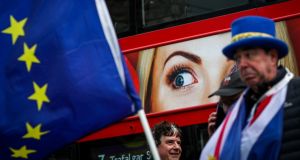 A no-deal Brexit would be far from pleasant for Irish exporters, according to the Central Bank. Photograph: Bloomberg

The Central Bank is predicting that a no-deal Brexit would heap pain on Irish exporters by pushing sterling down to near parity with the euro. Eoin Burke-Kennedy has details the bank’s grim outlook, which is contained within its latest quarterly bulletin. It has also cut its economic growth forecasts.

Barry O’Halloran brings news that State-owned ESB could spend €700 million building several new power plants in Dublin over the next four years as demand for electricity surges, partly on the back of data centres.

Shares in Independent News & Media soared by close to a third on Thursday after the media group confirmed a possible takeover approach. Mark Paul and Joe Brennan report on the development and on speculation over the identity of possible suitors.

Mark also reports this morning on the business performance of Sims IVF group, the largest Irish provider of fertility services, which doubled the dividend it paid to its listed Australian owner last year.

And in his Caveat column, Mark considers the idea of corporate whistle-blowers and how we treat them after the early media and public storms of admiration have fallen away. We should do better, he says.

The difference between the average amount men and women are paid in Bank of Ireland’s UK division widened last year, with the mean hourly pay of women close to 40 per cent below that of their male colleagues. Joe Brennan has the story. He also reports on the bank’s chief executive yesterday acknowledging that it may sell further portfolios of problem loans after it completes a current €375 million sale.

In the same sector, John FitzGerald is concerned this week about securitisation, which he sees as a necessary device to help banks to manage their loans. These structures which allow lenders to package loans and sell them on help to keep a lid on mortgage rates, he argues.

This week’s Business Interview features Gerry Concannon, founder of Mayo software company CBE, who tells Peter Hamilton about life since he stepped down from the day-to-day running of the business. He talks about opportunities taken and missed, including a lucky escape from a risky property venture and his past as a lamb expert.

Colm Keena looks back on the extremely lengthy legal battle between the Quinn family and Anglo successor, IBRC, which this week resulted in a settlement at the High Court. Taxpayers will face the financial fallout of the saga for years to come, he writes in our Business Agenda.

In our Work section, Olive Keogh looks at the concept of change and how we manage it in the workplace. She suggests that it isn’t the change that causes us to trip up, but the pace of it.

This week’s Wild Goose is scientist Dr Joseph Regan of Bayer, who settled in Berlin via Ireland, Newfoundland and Chichester. He explains to Olive Keogh that despite his many academic achievements, he found it easier to establish his career outside Ireland than at home.

1 Money matters: ‘My father embarrassed us with his haggling’
2 Opioid executive admits to ‘no morals’ ahead of prison term
3 Pilita Clark: When a rude boss keeps you waiting, why not walk out?
4 NI house builder apologises to Harry and Meghan over adverts
5 Comcast acquires Irish cloud-based telco Blueface
6 UK’s Henderson Park to seek €400m-plus for five prime Dubin office blocks
7 Blueface sold to Comcast, Dublin offices for sale, and NI builder’s royal blunder
8 Are there annual limits on inheritances or gifts to a child?
9 Inheritance tax rules where young grandson’s dad has died
10 Stocktake: Skyrocketing Tesla may drive ‘mother of all short squeezes’
Real news has value SUBSCRIBE