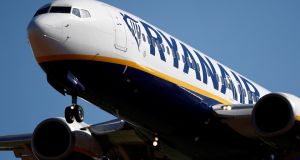 Citadel Europe, the hedge fund founded by billionaire Ken Griffin, has taken a 0.56 per cent short position in Ryanair, according to data disclosed to the Central Bank of Ireland.

A short position in a stock amounts to a bet that a company’s share price will fall.

Based on Ryanair’s current market valuation of €13.2 billion, Citadel’s move amounts to a bet of about €74 million that the airline’s share price will drop.

Under the short selling regulations introduced in 2012 after the financial crisis, “significant” net short positions in publicly quoted companies must be disclosed to the regulator.

This is the first such disclosure in connection with Ryanair.

In February, Mr Griffin told investors in his annual letter that he expected heightened stock market volatility to create lucrative trading opportunities in 2019.

He cited Brexit as one of the key macroeconomic risks his fund would be monitoring, according to the Financial Times.

Analysts at stockbroker Davy said last week that they believe Ryanair’s share price could increase back to €15 as the airline increases its share of the European market and changes its structure to cash in on new opportunities.

They argued that the current price fails to reflect Ryanair’s capacity to grow and its potential to generate cash.

They also said Ryanair’s low costs give it a significant advantage over rivals, and that it would increase its share of European air travel to 16 per cent this year from 15 per cent in 2018.

Mr Furlong and Mr Harvey also said they expect a change in corporate structure that will see a holding company overseeing operating subsidiaries will offer scope for further growth.

1 Jervis shopping centre takes major tenants to court over rent disputes
2 Seán FitzPatrick makes fresh bid to secure planning for new Greystones home
3 Energia’s owner ‘plans to sell it later this year’ in deal worth €2bn
4 Dogpatch Labs and SOSV shortlisted to win NDRC contract
5 Digital pollution: ‘We have a pandemic of data and 90% of it is crap’
6 Shed Distillery in Leitrim to open €3m visitor centre next month
7 TikTok up against the clock as US ban leaves it at crucial juncture
8 Microsoft returns to mobile market with Surface Duo
9 Aryzta’s pick for chairman faces opposition from investors
10 Jervis rent row, Energia for sale and Shed Distillery’s €3m investment
Real news has value SUBSCRIBE