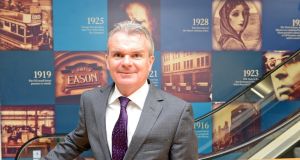 Chairman of Retail Ireland Conor Whelan: “Irish retailers remain optimistic about the future, with the majority having ambitions to develop, invest in and expand their businesses in the next three years.” Photograph: Eric Luke

The retail sector needs tax credits, less regulation and more State support for regenerating town centres if it is to thrive in the face of Brexit, a new report for Retail Ireland has warned. The study also identifies the increasing popularity of online shopping as a threat to the retail sector, which is the State’s biggest private-sector employer with more than 280,000 workers.

Published on Thursday, the Ibec group’s report, Shaping the Future of Irish Retail, offers a strategy for the sector up to 2020. It suggests retailers are planning a major injection of investment in people, skills, store refurbishments and technology over the next three years.

The report, described as “the most comprehensive strategy developed for the sector to date” incorporates views from retailers, policymakers, employee representatives and consumer groups.

While retailers appear optimistic about the future, the value of retail sales are still 13 per cent off pre-crisis levels.Retail Ireland suggests Brexit is already affecting the performance of the sector, with growth in retail sales between 2017 and 2020 likely to average between 1.2 per cent and 2.2 per cent year, mostly driven by population growth.

In the report, Retail Ireland calls on the Government to introduce a tax credit to help retailers compete with international online retailers. It also wants a reduction in the cost of regulatory compliance, more State support for training and concerted efforts to “regenerate Ireland’s high streets”.

“The results of our report show that despite a considerable softening of sentiment since the Brexit vote, Irish retailers remain optimistic about the future, with the majority having ambitions to develop, invest in and expand their businesses in the next three years,” said Conor Whelan, the chairman of Retail Ireland and managing director of Eason Group.

“In fact, 85 per cent of retailers surveyed said they intend to invest in people and careers in the next three to five years and 92 per cent are planning to invest in new technology and refurbishment.”