‘When you’ve been around as long as me, you’re not expecting something like this’ 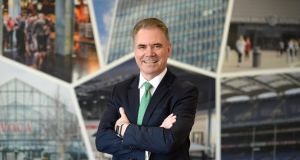 “What I’d say is 2020 has been a challenging year for our industry,” says Frank Gleeson. The man is clearly a master of understatement.

Gleeson runs Aramark, the property, retail and services group with interests in multiple sectors of the economy. He’s responsible for around 5,000 people in Ireland and 16,000 in his wider role as head of northern Europe for the US multinational. And we’re talking as his business and others battle through the third Level 5 lockdown in a year.

It’s been a sobering time for all business, even more so for one that relies so heavily on the food service and retail sectors. “When you’ve been around as long as me and you get through a couple of recessions, you’re not expecting something like this,” he says. “So, it’s kind of uncharted water. But it’s like anything; you just have to deal with things as they come at you.”

Gleeson is already planning and preparing for when the economy starts to open up again. Not that business ever ground fully to a halt for Aramark. With a portfolio of interests that runs from Croke Park’s food concessions to direct provision centres, hospitals and upmarket retailer Avoca, a large part of Gleeson’s business has remained open during the Covid pandemic, even if the roles of his people have changed somewhat.

He reckons that between 20 per cent and 25 per cent of his staff are on furlough across the group on average, and he’s grateful for the Government wage subsidies that allowed companies such as Aramark to keep those employees on their books. But in some sectors, like the company’s growing property management business, all staff are at their desks, if not necessarily in the office.

Property has been one of the fastest growing parts of Aramark’s business in Ireland, helped in large part by the surge in build-to-rent apartment complexes. Originally, it had been involved more in managing commercial operations, such as offices and shopping centres for clients.

“We’ve broadened it up and moved into residential spaces, a sector that has opened up with large investment companies coming in,” Gleeson says. And it has proven relatively immune to Covid. The private rented sector was the single most active segment of Ireland’s property market last year.

“They like us because we’re good at things in that property sector – from lease negotiations, management of buildings to rent collections – all the things you’d expect from a full-service property business outside of transactions.”

Ires Reit, the listed business that is Ireland’s largest private residential landlord with 3,700 units, has become an important client, as have Irish Life and Marlet. Gleeson is confident that it will continue to experience significant growth for Aramark.

And while large swathes of the Irish office market currently lie empty, manufacturers like Apple and many others continue to operate at as close to full capacity as possible.

Healthcare operations – Aramark works with both hospitals and nursing homes – have also, inevitably, seen a surge in demand for services that has allowed the group redeploy staff from other shuttered areas of its business. The company also struck a deal with one of its big supermarket clients back in April to place 100 Aramark staff from other areas of the business. Gleeson says that, even now, there are up to 110 vacancies regularly for redeployment within the group.

Gleeson was a signatory to a somewhat controversial open letter sent by business leaders in the hospitality sector to Government back in October as the National Public Health Emergency Team (Nphet) called for the reintroduction of Level 5 lockdown measures.

While the Government did introduce lockdown restrictions later that month, it lifted them ahead of Christmas under sustained pressure from the retail and hospitality sectors – and a second open letter from the industry that the Aramark boss did not sign. It was a move that led to a dramatic spike in numbers of cases and deaths from the virus.

“At the time what we were trying to do was create balance between the economy [and public health]. There was pent up demand, a lot of people wanted things to reopen and, broadly speaking, hospitality did a really good job of reopening. The challenge of course is people’s behaviour.

“Notwithstanding, we’re all very disappointed with the subsequent infection rates. Was it schools, was it the social gatherings at home or was it the opening up of restrictions? I don’t know. I think hindsight will tell us what it might have been but the simple reality is that everyone was trying to make a good decision, or at least trying to make a decision that was balanced for the sectors.”

He acknowledges there are lessons to be learned from that pre-Christmas experience in “making sure we reopen in the right way this time”.

“I think hospitality and retail might be a bit longer than we had hoped,” he says, though he is confident that “the fundamentals are good for a rebound” with strong private savings building up over the past year and a continuing strong performance from multinationals in Ireland and from manufacturers.

“The question of course is when will that happen and it can only happen when we reach some sort of critical mass on the vaccinations, when people are confident they can reopen without pressurising healthcare… We’ll make sure when we’re asked to reopen that we can reopen safely.”

Wearing his hat as a board member of business lobby Ibec, where he is due to assume the presidency next year, Gleeson says he worries about the broader business ecosystem outside Aramark’s own operations.

He expects any return to offices will be some way shy of 100 per cent capacity, meaning less demand for bars, restaurants and coffee shops in city and town centres, and he is calling for continuing Government support for small and medium-sized operations when normal trading resumes.

But what about companies that will not make it – either because they have been fatally undermined by the pandemic or were in trouble before it? At what point should the Government be more selective in its support?

“I think in the short-term, certainly for the first half of this year, we’ve got to support the sectors that we believe are being badly affected to rebound,” he says, citing particularly leisure, hospitality and tourism. “We’ve got to allow these firms at least reopen if they can and give them a chance.”

And for those that cannot make it, he’s clear that Aramark will be in the business for opportunities that might emerge to acquire companies that fit its model or will facilitate further growth.

For Aramark, a business that operates on single digit profit margins, cost management is critical. But Gleeson is aware that a return to more normal working patterns will mean further margin compression for it and for business in general – between investment in screens, spacing and hygiene products like sanitisers and day-to-day costs like the need for more intensive cleaning regimes as keeping people safe remains a corporate priority.

Gleeson foresees some changing work habits as well after a year when many people have got used to working from home, but he doesn’t anticipate the end of the office – lifeblood to significant parts of his food service and facilities business.

“There will be a change in the work/life balance but not everybody can work from home or wants to work from home. There’s certainly fatigue around that,” he says, pointing to poor broadband and pressure on space or even the simple practicalities of office equipment. “So, I think you’ll see a blended approach.”

On the upside, for Aramark, he thinks returning staff might be more cautious about heading out into crowds at lunchtime, increasing the opportunity for its inhouse dining operations. And the pandemic-driven demand for more intensive cleaning services is unlikely to disappear.

“We’ll work with our clients. The solution may need to change based on need. So there might be less food service because there are fewer employees [on site] … or more cleaning or maintenance,” Gleeson says, pointing to what he sees as a strength of Aramark’s broad-based business model. The group has used the pandemic to examine how cleaning regimes can be improved and food offerings adjusted to meet new expectations – such as for more single serving prepackaged offerings.

Speaking of food brings us to the Avoca retail group, whose landmark store in Dublin’s Suffolk Street remains closed – a victim of the absence of key tourist footfall in the city centre.

When Aramark bought Avoca from the Pratt family in late 2015 for around €64 million, it seemed an odd match. The cost conscious low margin multinational seemed a distance away from the type of upmarket retail and food operation founded 50 years earlier in an old mill in Co Wicklow.

Gleeson argues that image was always incomplete. Aramark, he argues, is no stranger to haute cuisine with a roster of corporate clients that demand Michelin star standard food. But more importantly, the US-listed business had the funds to expand the brand and ambition to internationalise it.

It has managed the former, with new outlets opening in Dunboyne, Dublin Airport and Ballsbridge. But the pandemic has put a stop for now to plans to bring the concept into new markets.

However, the central kitchen that was at the heart of much of Avoca’s food offering has been a valuable testing ground for Aramark, as well as allowing it to supply some of its other business dining locations that don’t require a full restaurant service on site.

A million miles away from the genteel Avoca shopfloors, another business segment for Aramark has been direct provision. The company runs three centres for the State, housing about 800 of the 6,000 or so people in the system.

It’s an area where Gleeson knows from experience to be careful. “I believe we do a great job. We get a lot of social media and what can you do about that. I believe it is unfair because our operations team do a great job on the ground. So has it been tough? Yeah, on the media side.

“There’s a service we’ve been asked to provide, we believe we provide a good service relevant to the contract that we have. They’ve been tendered a couple of times and we’ve won those tenders because of the quality of service and the price we give.”

On the Government policy to phase out direct provision, he is content to wait and see what happens. “It will change and our job will be to make sure that we can help Government deliver that service in a changed environment.”

Interests: A self-described Dublin “GAA nut”, he also loves to travel and hasn’t enjoyed “being grounded” since last March.

Something you might expect: As someone with a corporate interest in so many sectors, he is active in business lobby Ibec and takes over as president next year.

Something that might surprise: Gleeson toured Australia with a Dublin Colleges GAA team led by Ireland football legend Niall Quinn and featuring subsequent All Ireland winner Paul Clarke. His other claim to fame is that he was the man who first introduced coffee into petrol forecourt retailers in his time with Statoil.