Paddy McKillen Jr buys Howl at the Moon for €3.2m

Dublin pub was owned by a Mercantile Group company which had debts of €2.5m 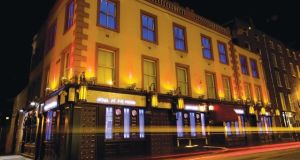 The Howl at the Moon pub on Mount Street in Dublin

The Mercantile hospitality group has sold well-known Dublin city outlet, Howl at the Moon, to its bigger rival Press Up Entertainment, for a price understood to be about €3.2 million.

Press Up, the country’s largest pub chain and controlled by Paddy McKillen Jr, acquired it using a new entity, Shortford. It registered Howl at the Moon in mid-December, records show.

Mr McKillen is a director of Shortford, which is registered to Glendenning House, headquarters of Press Up. Howl at the Moon was previously owned by Mercantile company, Lunam Management, which had debts of €2.5 million. It has 30 staff.

The landmark pub on Mount Street was originally part of the Capital Bars group previously controlled by the O’Dwyer brothers, Liam and Des. That group entered insolvency in 2009.

Four pubs from the Capital Bars portfolio were later bought for €15 million in 2014 by Danu Investment Partners, with financial firepower from Kerry-born builder, Maurice Regan.

There is currently a shareholders dispute at Mercantile between Mr Breslin and Mr Gleeson, with talks ongoing about how to split the business. There was an attempt recently by other shareholders to remove Mr Gleeson as chief executive, who remains in situ although he isn’t running affairs day-to-day.