Arcadia Group looks set to file for administration in the UK 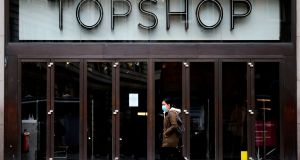 Like other retailers, Topshop owner Arcadia has been hit hard by Covid-19 restrictions. Photograph: TOLGA AKMEN/AFP via Getty Images

Arcadia Group, the retail empire controlled by Philip Green is likely to file for administration in the UK as early as next week, putting 13,000 global jobs at risk.

The owner of the Topshop and Topman brands wrote in an emailed statement that it’s exploring “a number of contingency options” after the closure of its stores due to Covid-19 “had a material impact on trading across our businesses.”

Arcadia’s brands include Miss Selfridge, Evans, Dorothy Perkins and Wallis, and it operates a number of shops across Ireland. Last year it said it would close six of these, as part of a group restructuring plan, but the latest move would lead to further closures and job losses and Ireland.

One of the options under consideration is a light-touch administration, where the existing management remains in place under the supervision of the administrators, according to people familiar with the matter, who asked not to be named because it’s private.

Debenhams, the struggling department store retailer, recently filed for the same type of insolvency process which allows the company to continue operating. Consultancy group Deloitte, which has been working with Arcadia for months attempting to secure additional funding for the group, is being lined up as administrator.

If Arcadia does file for administration, it could put 13,000 jobs and about 500 stores across the country at risk. It would be another blow to Britain’s retail sector which is reeling from the impact of the pandemic and government-mandated store closures.

“2020 has been a terrible year for the high street, with more than 125,000 retail jobs lost and over 13,000 shops permanently shut,” said Dave Gill, national officer for the UK union Usdaw. “Retail job losses and store closures are absolutely devastating and lay bare the scale of the challenge the industry faces.”

Even before the pandemic, retailers were already operating in a highly competitive market and grappling with high rents and the continued consumer shift to online shopping. Green is one of the most controversial characters in British business. Once feted as the “king of the high street,” his reputation was damaged following the sale and subsequent high-profile collapse of BHS, a department store business previously owned by Arcadia. He was criticised for putting at risk the pensions of thousands of current and former BHS employees and for payments of large dividends to his wife, Tina Green, who is the ultimate owner of the Arcadia business. – Bloomberg