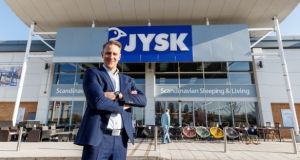 Jysk, a Danish home retailer which opened its first stores in the Republic last year, remains on track to have about 20 outlets open here by the end of 2021 despite the impact of Covid-19 on the Irish economy and the retail sector.

The furniture seller, which currently has eight physical stores open across the State and one in Dublin officially opening next week, said while it has been hit by Covid restrictions it had recorded positive earnings before interest and taxes (ebit) in Ireland during its first year.

Jysk Ireland, which merged with the group’s UK business over the summer, does not break out figures for the Irish market.

The retailer said combined Irish and British sales reached €41 million for the 2019-2020 financial year. This marked a 74 per cent increase on the previous year. The company has 21 stores in Britain, having opened its first one there in 2018.

Jysk, which in total operates more than 2,900 stores in 51 countries, announced record global turnover of €4.1 billion.

The group employs 112 people in Ireland, and plans to recruit up to 150 more over the next 12 months as other stores open.

Roni Touminen, country manager for Ireland and Britain, said it intended to “aggressively continue with its expansion plans” over the next 12 months.

“We had a really good start to the year, and despite the Covid crisis have still had a positive result which we are really happy about,” he told The Irish Times.

“This gives us the confidence to continue with our expansion plans. We are currently looking at a dozen sites that we are actively trying to get sorted, but this has been difficult to do because of the pandemic. But our goal is to have at least 10 stores open by the end of next year.”

Mr Touminen said Jysk, which opened its first store in Naas, Co Kildare, in April 2019, had benefited from pent-up consumer demand following the lifting of restrictions over the summer, and he added that its online store had seen a huge rise in sales. However, this had led to logistical challenges as well as financial ones for the company.

“The upcoming weeks are important to us and we have been preparing for the lifting of restrictions and welcoming customers safely back into our stores, and I think that next year will be a very good one for us,” said Mr Touminen.