Employees seeking better working hours and conditions from the retailer

Michael Meegan of Mandate Trade Union explains why staff of Dunnes Stores have decided to strike and picket around the country. Video: Bryan O'Brien 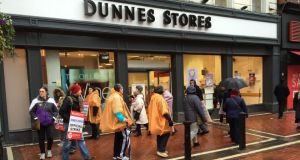 Dunnes workers on the picket outside the North Earl Street shop 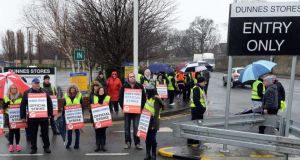 The one-day industrial action, organised by trade union Mandate, is taking place with the aim of keeping customers out of Dunnes Stores shops on Holy Thursday.

Dunnes Stores outlets remain open across the country despite the industrial action, they are being staffed by managers and non-unionised members of staff.

“All we’re asking is for Dunnes Stores to sit down and talk with us and to look at these contracts,” he said.

Standing outside the Henry Street Dunnes Stores, he said the workers were receiving a lot of support from passersby.

A small number of customers were passing the picket but most appeared to be staying away.

“The majority of people are staying out,” said Mr Meegan. “You get an odd few going in but the main aim is to keep as many customers out as possible today.”

The stoppage is likely to hit the company’s pre-Easter sales, particularly of alcohol on the day before Good Friday, when drink sales across the State are banned.

At Dunnes Stores in Clonakilty, Co Cork, 21 of the 75 staff have been rotating shifts on the picket line since 7am.

Nicole, a single mum of four, did not want her full name used.

“I’ve got two kids I’m trying to put through college and a young son in school so it’s extremely hard, when I don’t know from one week to the other what my hours are going to be and trying to budget and pay the bills and everything else.

“We want proper contracts, proper hours just proper working conditions so that we know from week to week that we are going to be okay, that we can put food on the table and pay our bills. With just a minimum of 15 hours I can’t even get a loan for a car, they just won’t entertain it,” she said.

Store representative for Mandate Union Padraig O’Reilly has a full time contract but he and his wife can’t get a mortgage because she has a work contract for 15 hours per week.

“We want to get the 15 hours contracts wiped out and replaced by banded hour contracts. Many people here who have applied for mortgages or car loans, they can’t get anything from local financial institutions, they are told sorry no, because the hours are unstable,” he said.

Workers have been outside shops since 6am and Ms Walker said only “an odd few” customers have passed the picket so far.

The strike by members of Mandate, which represents about 60 per cent of the company’s workers, has been backed by the trade union movement generally across the country.

The company is offering a 20 per cent discount on purchases made through its website until midnight on Thursday.

The dispute centres on demands for secure hours and earnings, job security, pay and the right to trade union representation.

Dunnes Stores has not commented publicly on the dispute, but has previously warned staff of possible layoffs and redundancies if “harm” was inflicted on the company as a result of industrial action.