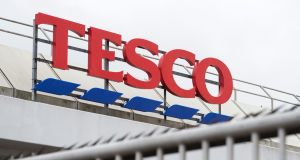 Tesco, Britain’s biggest retailer, has experienced some disruption to supplies, particularly to Ireland, North and South, since a post-Brexit trade deal with the European Union kicked in on January 1st, its boss said on Thursday.

“We have seen some limited disruption into the Republic of Ireland and into the north of Ireland, but we’re working very closely with government on both sides of the Irish Sea to smooth the flow of product,” Ken Murphy told reporters after Tesco updated on Christmas trading.

He said Tesco’s product availability in both markets “remains strong”.

The disruption was limited to certain categories such as short shelf life ready meals, he said. The chief executive said he was confident Tesco would have right measures in place to supply Northern Ireland after end of a three-month grace period on certain rules and regulations with the EU on March 31st.

Mr Murphy also said there had also been “teething problems” with supply flows from continental Europe to the UK.

“Inevitably there are bedding-in issues, teething issues, that you would expect with any new process that’s been set up at relatively short notice,” he said. “We’re working our way through those and we would hope over the coming weeks and months that we will end up with a much smoother flow of product.”

Sales in the Republic were 11.7 per cent higher in the third quarter to November 28th, with that figure rising to 12 per cent when the Christmas trading period was included.

“We delivered a record Christmas across all of our formats and channels,” said Mr Murphy, who succeeded Dave Lewis in October.

But it still maintained its guidance for 2020-21 retail operating profit before exceptional items of “at least” the same level as 2019-20’s, excluding the repayment of £535 million of business rates relief.

Tesco also continues to expect to report a loss for Tesco Bank of between £175 million and £200 million for the year. – Reuters