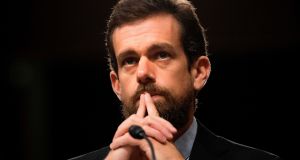 Jack Dorsey (43) joins a growing list of celebrities, world leaders and technologists who are earmarking some portion of their wealth to fighting the spread of the coronavirus and its effects. Photo: Getty Images

Jack Dorsey, chief executive of Twitter and Square, said he planned to donate $1 billion (€920 million), or just under a third of his total wealth, to relief programmes related to the coronavirus, in one of the more significant efforts by a tech billionaire to fight the pandemic.

Dorsey said he would put 28 per cent of his wealth, in the form of shares in his mobile payments company Square, into a limited liability company that he had created, called Start Small. Start Small would make grants to beneficiaries, he said, with the expenditures to be recorded in a publicly accessible Google document.

“Why now? The needs are increasingly urgent, and I want to see the impact in my lifetime,” Dorsey said in a series of tweets announcing his plans. “I hope this inspires others to do something similar.”

Dorsey (43) joins a growing list of celebrities, world leaders and technologists who are earmarking some portion of their wealth to fighting the spread of the coronavirus and its effects.

Oprah Winfrey has donated more than $10 million of her personal wealth to COVID-19 relief efforts, while other Hollywood personalities – including Justin Timberlake, Dolly Parton and Rihanna – have also made contributions. Last week, Amazon chief executive Jeff Bezos said he would donate $100 million to US food banks through a nonprofit, Feeding America.

And Mark Zuckerberg, chief executive of Facebook, has also organised relief campaigns through Facebook and his own philanthropic organisation, the Chan Zuckerberg Initiative.

Meanwhile, Intel said it was is pledging an additional $50 million in a pandemic response technology initiative to combat coronavirus, in addition to $10 million in donations previously announced. The plan involves Intel accelerate access to technology at the point of patient care, speeding scientific research and ensuring access to online learning for students.

“The world faces an enormous challenge in fighting Covid-19. Intel is committed to accelerating access to technology that can combat the current pandemic and enable new technology and scientific discovery that better prepares society for future crises,” said Intel chief executive Bob Swan. “We hope that by sharing our expertise, resources and technology, we can help to accelerate work that saves lives and expands access to critical services around the world during this challenging time.

As part of the $50 million donation, Intel is setting aside up to $10 million for an innovation fund to support projects addressing critical needs in communities.

Even so, Dorsey’s contribution stands out for the sum he is putting in and for how much of his net worth that represents. Square declined a request for an interview with Dorsey. Twitter declined to comment.

In creating a limited liability company, Dorsey is following a model that Zuckerberg has used. In 2015, when Zuckerberg and his wife, Priscilla Chan, set up the Chan Zuckerberg Initiative, it was organised as an LLC, holding much of their wealth to fund charitable causes.

At the time, critics said the vehicle was a self-serving manoeuvre that allowed Zuckerberg to engage in private lobbying, for-profit investment and political donations. Zuckerberg pushed back, saying a limited liability company gave him and his wife more control over how their resources would be put to use.

Dorsey, who has been criticised in the past for his lack of transparency around philanthropic efforts, said he was creating an LLC for flexibility and pledged to use the Google document to update the public on its latest grants, stock transfers and sales.

Dorsey said he plans to shift the aim of Start Small to supporting initiatives around universal basic income, under which Americans would get a base level of regular income from the federal government, and women’s health and education efforts.

Universal basic income has been a pet issue for some Silicon Valley progressives, made more popular in recent months by the now-ended presidential candidacy of Andrew Yang, a Democrat who ran partly on the idea. “Life is too short, so let’s do everything we can today to help people now,” Dorsey tweeted, followed by an emoji of a peace sign hand gesture. – The New York Times News Service