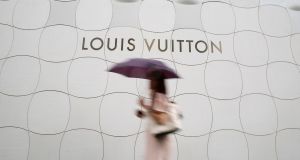 A Louis Vuitton branch, which is LVMH’s biggest brand accounting for almost half of group operating profit.

LVMH and Kering, the world’s biggest luxury goods groups, told employees they would be a placed on an emergency government assistance scheme but later backtracked after smaller rivals Hermes and Chanel pledged to cope without state support in a spirit of “national solidarity”.

Internal emails and documents reviewed by the Financial Times show that soon after France entered lockdown on March 15th, LVMH had started to put some workers on the government’s so-called “partial activity” scheme across its various businesses.

The scheme, the centrepiece of France’s emergency efforts to prop up its economy during coronavirus, allows companies to put workers on reduced hours or furlough them while the state finances most of their salaries in an attempt to avoid mass lay-offs.

Workers at Louis Vuitton, LVMH’s biggest brand accounting for almost half of group operating profit, and beauty retailer Sephora were among those told in March they would be put on the government programme – only to have the decision reversed last week.

Similar events took place at Gucci-owner Kering. A union representative at Boucheron, a watch and jewellery brand, said in an interview that three meetings had been held in recent weeks about putting staff on the “partial activity” scheme.

But on Monday, the union was informed that the plan would not go ahead, said Yannick Blaise, a CFDT representative at Boucheron.

Whether to tap state aid has turned into a fraught question for some of France’s biggest companies because asking for help risks turning once internal matters such as executive pay or dividends into matters of public debate.

Some such as Total and Société Générale have promised not to use the partial activity scheme so as not to weigh on public accounts.

To date, some 473,000 companies have applied for help to cover the costs of some 5 million workers, including at Airbus, Renault, and Air France-KLM, at a cost of more than €11 billion for the state.

In luxury, the equation is complicated by the fact that LVMH and Kering are controlled by the richest and third-richest men in the country respectively, according to Forbes magazine’s rankings.

The two billionaires, LVMH’s Bernard Arnault and Kering’s François-Henri Pinault, are fierce competitors and high-profile figures in France whose moves are scrutinised closely.

Both have donated money and resources to the fight against Covid-19 in recent weeks, with LVMH being lauded for converting perfume factories over to making hand sanitiser for health workers.

Jenny Urbina, a CGT labour representative at Sephora, said the company had told employees that its reversed decision not to rely on the scheme would apply across LVMH, except for at its newspapers Les Echos and Le Parisien.

“I think they moved ahead too quickly and didn’t think about how it would look, and were caught out when competitors made their announcements,” she told the FT.

“While we are happy that the company did this, we at the CGT thought that it was scandalous that LVMH wanted to seek help from the state. Those programmes are supposed to help fragile companies and workers who really need it, not the big profitable ones.”

Chanel, which is privately owned and family controlled, on March 28th said it did not intend to use the “partial activity” aid programme at this stage of the crisis.

“Our aim is not to weigh on the public accounts so the French state can prioritise help to the most vulnerable companies, and focus its resources on the health system and its doctors and nurses,” it said in a statement.

Hermes, which is also family-backed, went further on April 1st by promising to maintain the salaries of its 15,500 employees worldwide, and not to fall back any “partial activity” for the length of the crisis.

An LVMH spokesman said the company was not in the habit of making decisions based on its competitors’ actions. Kering declined to comment. – Copyright The Financial Times Limited 2020