Telco group Cignal dials up its borrowings by nearly €34m 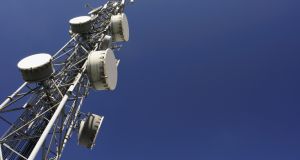 Irish telecommunications company Cignal has refinanced its loan facilities with Bank of Ireland and AIB, growing its borrowings by almost €34 million as the company seeks to add to its existing tower infrastructure.

The company, which acquired a portfolio of 400 sites from Coillte in 2015, has expanded its loan facility to €65 million, having achieved bank support of €31.5 million for the Coillte transaction.

Bank of Ireland acted as lead arranger for the new facilities alongside AIB, which became a joint lender to the business.

Backed by majority shareholder Infravia Capital Partners, which recently bought the Mater Private Hospital, the company has a portfolio comprising telecoms and broadband communications towers in over 500 locations.

It recently spent €15 million on acquiring and building new towers in an effort to address coverage blackspots throughout the Republic. The company’s chief executive, Colin Cunningham, said the expanded facility will “support the next phase in our growth plans”.

Cignal offers services to the main mobile and wireless service providers in Ireland, the emergency services and FM radio stations, with multiple customers using each tower. The company has previously said the approach helps to cut costs for customers, particularly in more sparsely populated areas of rural Ireland, and eliminates the need for multiple towers in one location.

Commenting on the enlarged finance facility, Bank of Ireland’s director of corporate banking, Maurice Healy, said that lending to high-quality infrastructure assets is an “attractive proposition”.

Cignal said it now has an 18 per cent share of the Irish market for infrastructure supporting mobile, fixed wireless broadband communications and broadcast services.

The Irish arm began managing assets when the Coillte portfolio, including 104 masts located within its forests, was acquired. The rest of that network includes sites leased by Coillte to other companies, which developed masts while Coillte acted as landlord.

In 2017, it acquired 30 towers from a private tower operator, and a further 10 towers from Telent earlier this year.