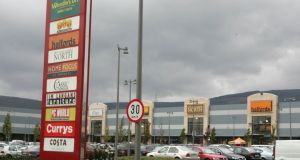 The impact of out-of-town shopping centres exacerbated the challenges faced by businesses in small towns, according to the SCSI. Photograph: Cyril Byrne

Small towns in Ireland are suffering a long drawn-out decline with urgent action needed to ensure their survival, according to a new report from the Society of Chartered Surveyors Ireland (SCSI).

It warns that factors such as increased costs, the legacy of out-of-town shopping centres, the dissolution of town councils and high vacancy rates have all contributed to a “perfect storm” for regional high streets.

The report also cites other issues that have led to the decline of town centres across the Republic. These include the economic recession, a focus on urban development and the rise of online shopping.

A restriction on out-of-town shopping centres and the provision of high-speed broadband nationwide are among the measures proposed by the SCSI to reverse the decline. Other recommendations include restoring residential use to main streets and a proactive approach to dealing with vacant buildings via the introduction of a land value tax.

The report, which is entitled “Rejuvenating Ireland’s small-town centres” focuses on 200 towns with populations of between 1,500 and 10,000. It was published to coincide with the SCSI’s national conference which is taking place in Kilkenny on Friday.

The author of the report, Stephen Purcell from Future Analytics Consulting, said many smaller towns were ill-prepared for the economic crash when it happened and had found it hard to recover in the years afterwards.

“The crash when it came pushed more people towards our main cities – or emigration – while the impact of out-of-town shopping centres exacerbated the challenges faced by businesses in small towns. In fact, many small towns are dealing with the legacy issues associated with these centres as they often put small local businesses out of business – leading to vacant buildings – before becoming vacant themselves due to lack of critical mass and their peripheral locations,” said Mr Purcell.

Almost 600,000 people or 13 per cent of the population live in towns of between 1,500 and 10,000 residents. However, the SCSI’s report shows that population growth over the last 20-odd years has been far from even with some areas such as Co Meath growing by 78 per cent, while the increase in counties Sligo, Mayo and Kerry was just 17 per cent.

The report calls for the establishment of an Irish towns partnership – to provide local leadership and help fill the void left by the dissolution of town councils – as well as a proactive approach to restoring buildings to residential use and tackling the problem of vacant buildings.

“A common theme that emerged throughout the compilation of this report was the importance of strong and visionary local authorities. While the dissolution of the town councils four years ago removed truly local decision-making from the hands of individual towns, more powers were provided to local authorities. Therefore, it is the local authority which must drive forward the rejuvenation efforts in towns within their boundaries,” said Mr Purcell.

He added there should also be recognition of the changing commercial landscape and the introduction of incentives to attract new businesses.

“There has been a lot of coverage in the media recently about problems with the rollout of the National Broadband Plan. For businesses in small towns, not having broadband is akin to operating with one hand tied behind their back. The delivery of high-quality broadband connections is fundamentally important for high streets and the implementation and roll-out of the NBP must be prioritised by Government,” said Mr Purcell.