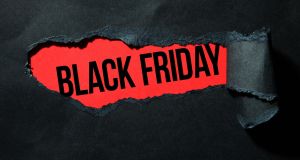 According to new research from Virgin Media, almost 90 per cent of Irish consumers plan to take advantage of the forthcoming Black Friday sales to do some or all of their Christmas shopping.

Online shoppers in the Republic have firmly embraced Black Friday and Cyber Monday, according to new figures that show sales orders originating from Ireland jumped 635 per cent last November compared with the monthly average.

The data, which comes ahead of this year’s Black Friday, shows the Republic was the highest performing market globally in terms of percentage uplift in cross-border purchases during November 2017.

The company, whose customers include Victoria’s Secret and Nike, said that in November 2017 it saw global online sales orders jump by more than 100 per cent during the month, with the Republic showing the biggest spike of all markets.

Chief executive Tommy Kelly said this month is by far the busiest one for online shoppers with Singles Day in China, which takes place on November 11th, also contributing to a surge in sales.

Black Friday, which comes the day after Thanksgiving, marks the beginning of the Christmas shopping season in the United States, with Cyber Monday following a few days later. Online retailers typically offer discounts on goods during the period as they seek to encourage consumers to splash out early on presents ahead of December 25th.

The Black Friday shopping phenomenon has spread globally with Irish shoppers among the most enthusiastic fans.

According to new research from Virgin Media, almost 90 per cent of Irish consumers plan to take advantage of the forthcoming Black Friday sales to do some or all of their Christmas shopping.

Autoaddress, an Irish company that validates addresses quickly online for delivery drivers, said it expected Black Friday would soon overtake Christmas as the busiest home-shopping delivery period of the year.

Its figures show the number of deliveries in the week following Black Friday last year jumped 48 per cent. Current activity in the days leading up to this year’s Black Friday week and weekend is already up 17.5 per cent compared with an average week, it said.

All of this should be good news for Irish retailers but the reality is somewhat different. A survey conducted by PayPal earlier this year showed Irish consumers are more likely to opt for international online stores than local ones.

The study found Irish people are currently the biggest international online shoppers in the world with 84 per cent buying overseas. It forecast that Irish consumers would spend €7.8 billion online this year, compared with €6.5 billion in 2017.