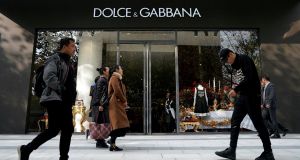 A Dolce & Gabbana store in Shanghai. The furore over its ads threatened to grow into a setback for one of Italy’s best-known fashion brands in a crucial market. Photograph: Aly Song/Reuters

Chinese ecommerce sites have removed Dolce & Gabbana products amid a spiralling backlash against an advertising campaign that was decried as racist by celebrities and on social media.

The ads – released earlier this week to drum up interest in a Shanghai fashion show the Italian brand later cancelled – featured a Chinese woman struggling to eat spaghetti and pizza with chopsticks, sparking criticism from consumers.

The blunder was compounded when screenshots were circulated online of a private Instagram conversation, in which the brand’s designer Stefano Gabbana makes a reference to “China Ignorant Dirty Smelling Mafia” and uses the smiling poo emoji to describe the country. The brand said Gabbana’s account had been hacked.

Amid calls for a boycott, the furore threatened to grow into a big setback for one of Italy’s best-known fashion brands in a crucial market, where rivals from Louis Vuitton of LVMH to Kering’s Gucci are vying to expand.

Chinese customers account for more than a third of spending on luxury products worldwide, and are increasingly shopping for these in their home market rather than on overseas trips.

On Yoox Net-A-Porter – owned by Cartier parent Richemont and a leading online high-end retailer – the label’s wares were no longer available on its platforms within China. The company declined to comment.

Checks done by Reuters on Thursday morning also showed pages that previously linked to Dolce & Gabbana items on the ecommerce sites hosted by Alibaba and JD.com were no longer available and searches for the brand returned no products.

Alibaba and JD.com did not respond to requests for comment, and Dolce & Gabbana did not comment on the retailers’ moves. – Reuters