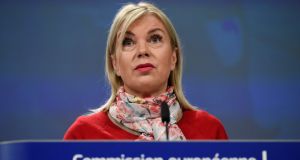 Europe’s single market in services retains too many barriers to trade, the Minister for Business, Enterprise and Innovation Heather Humphreys on Thursday told Brussels diplomats and EU officials at the launch of a new Irish initiative on integrating the services market.

“For Ireland, with a relatively small domestic market, it is a tremendous advantage for us to have the EU’s single market of over 500 million people on our doorstep, with no tariffs. This is especially valuable as our companies work to diversify into new export markets,” the minister said, but services’ integration in Europe is lagging behind that in goods.

The joint initiative with the Czech Republic, Finland and Denmark, was welcomed by EU commissioner for the single market Elzbieta Bienkowska who warned that 25 years after its launch “problems still remain in the services market that have contributed to slow growth in intra-community trade and slow growth in sector productivity.”

She said that the increased servitisation and digitisation of the economy – the services share of value added in manufacturing increased from 20 per cent in 1995 to 27 per cent in 2011 – had seen the EU significantly lag behind the US in terms of productivity. The EU had to make completing the services single market a priority.

The four countries have commissioned a report – Making EU Trade in Services Work for All – from Danish economic consultants, the Copenhagen Economics Institute. It was launched at the Irish Permanent Representation office in Brussels.

The report points to the reality that as many as 30 services are now required to produce a loaf of bread, accounting for 72 per cent of its final price, but that while the single market has on average reduced trade costs by 20 per cent for goods, it had only done so by 7 per cent for services.

Productivity in EU services has grown at an strikingly slower rate than productivity in US services, the report says – the price of services in the EU is on average 11 per cent higher than US prices. Growth of intra-EU trade in services also lags behind Asia and the US.

The report argues that some 1.75 per cent could be added to EU GDP if already-agreed measures were implemented.

It recommends increased, annual monitoring of progress on removing internal barriers to services trade and the development of a services market scoreboard to highlight best practice state by state. It advocates special measures to ensure integration of the digital economy and the development of national targets based on best-performing states’ work.

The report says that the recognition of professional qualifications needs to be made a practical reality. The commission it says should eliminate regional language or local partner requirements and Introduce more effective sanctions for non-compliance.

The four countries hope that the agenda set by the report will be taken up by the Finnish Presidency of the EU in the latter half of next year.

1 Explainer: what is the row about SF’s multinational tax plan?
2 Britain after Brexit will not be alone, but it will be lonelier
3 Election 2020: Parties' pledges on housing simply don’t add up
4 BBC announces 450 jobs will go in newsroom shake-up
5 Getting out from under ‘never-ending’ Celtic Tiger debt burden
6 EU eyes phasing out smallest euro cent coins
7 737 Max crisis drags Boeing to first loss since 1997
8 Banks withdrawing from ATMs – another failure of regulation
9 Coronavirus shuts down Starbucks, Toyota and BA
10 Pensions: Estonia plans to unleash a potential €4.85bn on economy
Real news has value SUBSCRIBE