Brexit Proof Q&A: ‘Any strategy we form, in five days’ time it’s liable to be out of date’ 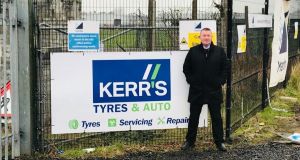 Kerr’s Tyres and Auto is an Antrim company with five branches in Northern Ireland. It recently acquired Dublin businesses Auto Tyre Services and Rathoath Vulcanising and Tyre Services, previously owned by the Maher family, in a bid to counteract Brexit uncertainty.

It plans to open two new centres in Donabate and Ballymount in Dublin and will expand to 90 staff.

I was shocked that that was the result but, given some of the political events across the world in recent years, I wasn’t completely shocked.

It’s impossible for the business to be Brexit-ready given the amount of uncertainty that’s out there. Any strategy we form, in five days’ time it’s liable to be out of date – apart, that is, from acquiring the businesses in Dublin.

For sure. As part of our overall growth strategy outside of Brexit, we’d always intended to consider new markets and suppliers. We offer a unique service where we rent tyres to large companies and we’re doing some of that with supermarkets and drinks wholesalers.

What brought us to Dublin was that some of our northern customers have bases here and we were already serving them. Some of the work we’re doing is not to sell, but to service the rental business.

We carry quite a heavy stock as it is. Part of our idea behind taking on the business in Dublin was to get additional warehousing within the European Union as needs be. As well as trading on the island, we trade with Europe. We need to keep that door open

That probably only makes up 18 per cent of our business at the moment. But we did see that, post-Brexit, the Republic would be our biggest growth market. We move where the population moves – two-thirds of the population live within a 50km distance of the eastern seaboard, so the Belfast to Dublin corridor is where the majority of business is to be had.

It will certainly change. A big part of our business is on the back of the haulage industry, which has made a lot of noise about Brexit. There’s no capacity for extra traffic in some instances on shipments to the UK or the EU coming from Northern Ireland. You only have to go on the M1 motorway in the evening to see the Northern Irish lorries going to Dublin Port, so we’re definitely going to see some side effects from whatever problems come up the runway.

At the moment, I think the fact that we’ve made a move to have a firm, solid base in Dublin is going to create opportunities, instead of trying to service our customers remotely. The size of the market in the greater Dublin area is not a lot different from the whole of Northern Ireland.

We might not have made the decision to move forward with our growth plans as soon without Brexit.

Leave things alone. It’s hard to know what help we’re going to need until we know what’s there. We don’t rely on any government funding in the North at all. We’re provided for by our shareholders and we’re self-sufficient that way .

I don’t think that will happen. It doesn’t have legs, would be my personal opinion.

I think there has been a long delay on something that should have been sorted a long time ago. There’s a lot of political point scoring and a lot of rhetoric used, which has been totally unnecessary. Everyone on these islands has to get on with their business once Brexit happens.