Retail sales jump 14% in December after restrictions were eased

Bar sales increased almost four-fold compared with November, but were still only a fraction of what is seen in normal times 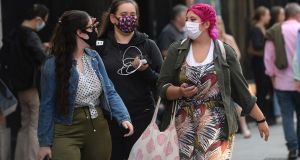 Retail sales jumped 14 per cent in December as coronavirus restrictions were eased in the run-up to Christmas.

The latest Central Statistics Office (CSO) figures show bar sales increased almost four-fold in December compared with November, but were still only a fraction of what is seen in normal times.

On a monthly basis sales were up in 10 of the 13 retail divisions covered by the CSO’s report.

There were monthly falls, however, in sales of electrical goods (-17.1 per cent) and sales of pharmaceuticals, medical and cosmetic articles (-1.8 per cent).

Sales were also up by 8.2 per cent on an annual basis in December, a sign perhaps of significant pent-up consumer demand in the Irish economy.

The Government made a decision to reopen shops and other sectors in December but this was rescinded shortly after Christmas amid a massive resurgence in Covid-19 cases.

The CSO data also showed the proportion of retail sales transacted online from Irish-registered companies decreased to 5.6 per cent in December from 12.4 per cent in November. This is below the peak of 15.3 per cent recorded in April at the height of the first lockdown.

The CSO’s figures do not cover online transactions with non-Irish-registered companies.